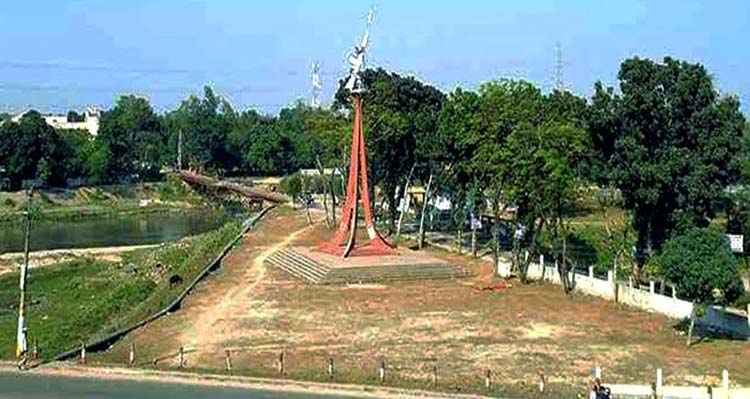 Thakurgaon was under the Sector no-6 during the War of Liberation under
command of Sector Commander and valiant freedom fighter Squadron Leader M.
Khademul Bashar.

"As the ultimate victory was becoming obvious after liberation of
Panchagarh on November 29, 1971, the demoralised Pakistani occupation army
started to retreat from the northern frontiers and set up their camp at the
then Thakurgaon EPR camp," he said.

While retreating, the occupation forces blew up the 'Bhulli' Bridge on
November 30 and planted underground mines at Salandar area near Thakurgaon
town to create hindrance to entrance of the freedom fighters and allied
forces.

"The freedom fighters and allied forces quickly repaired the 'Bhulli'
Bridge and tried to enter Thakurgaon town. But, they faced severe
obstructions due to underground mines placed in the area by the retreating
occupation forces," Badar added.

"Understanding their clear defeat, the Pakistani occupation forces
retreated further and set up their base at the 25-Mile point on the
Thakurgaon-Dinajpur road on December 2, 1971 after suffering from heavy
shelling by the allied forces," Mannan said.

Eyewitness Abdul Latif of Thakurgaon said thousands of people of
Thakurgaon town and surrounding areas welcomed the freedom fighters and
allied forces chanting the sky-cracking slogan of 'Joy Bangla' turning
Thakurgaon into a place of euphoria.

"The freedom fighters and allied forces, after defeating the Pakistani
army, and crushing their defenses at Panchagarh, Moidandighee, Boda and
Bhulli, also entered Thakurgaon town from the northern side," Latif said.

Former Ranisonkoil Upazila Muktijoddha Commander Sirajul Islam said many
other contingents of freedom fighters coming from Atwari, Ruhea, Akhanagar,
Baliadangi and Lahirihat also entered Thakurgaon town from the western side
on the day.

"Hundreds of freedom fighters along with tens of thousands of common
people paraded different roads of Thakurgaon town chanting the victorious
slogan of 'Joy Bangla' and hoisted the victory flag at Chowrasta Mour of the
town," Sirajul said.

Thakurgaon district administration and District Muktijoddha Sangsad with
other organisations have chalked out limited programmes to celebrate the
Thakurgaon Freedom Day-2021 tomorrow in the wake of the Covid-19 pandemic.