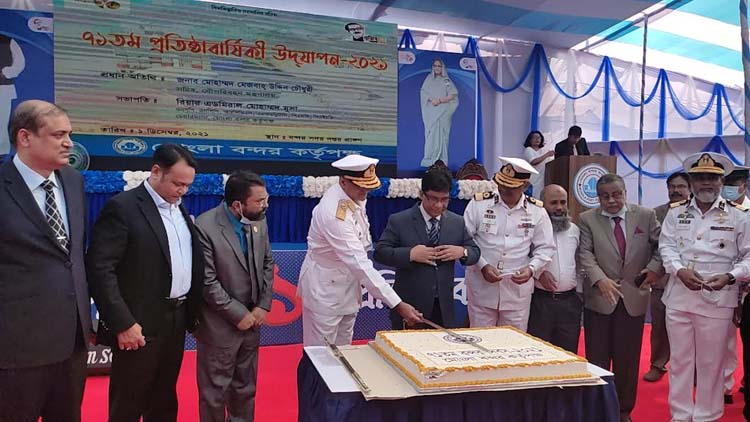 the Mongla Seaport was celebrated today with a commitment to
boosting its capacity, profit and service.

To mark the day, different programmes were held maintaining
social distance and health guidelines amid the coronavirus
pandemic.

All home and foreign ships anchored at the jetty blew whistle
for one minute at 12.01am.

On the occasion, a rally led by Chairman of the MPA Rear
Admiral Mohammad Musa started from the MPA administrative building
and ended at the main gate of the jetty after parading different
parts of the port area.

Established in 1950, Mongla Port has gone through many
struggles and setbacks, said a top official, adding:"Now it's one
of the busiest seaports of the country. Prime Minister Sheikh
Hasina took a visionary step to revitalise the port after Awami
League (AL) came to power in 2009."

While speaking at the discussion, Secretary of shipping
Ministry Mohammad Mesbah Uddin Chowdhury praised Prime Minister
Sheikh Hasina for her decision to turn the port into an active one
as chief guest.

He said Mongla Port's capacity will be increased by four
times within the next three years. About 500 acres of land of the
port have been readied for the construction and extension of its
jetty, yard and bonded warehouse, he added.

"The authority has implemented over 50 development programmes
from June 2009 to 2021 to enhance its capacity at a cost of Taka
10,000 crore," the Secretary further said, adding that the
government is working tirelessly to enhance the connectivity of
the Mongla Seaport.

He, however, said government has taken initiative to regular
dredging in Mongla-Ghadiakhali, Pashur, Mongla and other channels
to be anchored 9.5 meter draft foreign ships at the jetty.

Terming MPA has sent a project proposal about dredging, he
said, government has planned to approve it and to be implemented
the project so that 10 meter draft ships can easily anchored at
the port jetty.

Describing the facilities of the port, the MPA chairman said
foreign countries are interested to use this port as we are able
to present modern facilities to international investors. After
completion of the Padma Bridge, Mongla Port will be able to send
covered vans and cargoes to the capital city directly.