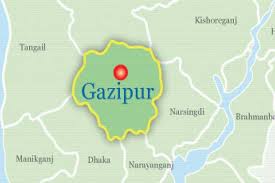 GAZIPUR, Nov 27, 2021 (BSS)- Around 500 houses were gutted in a fire that broke out near Senakalyan Bhaban on the Dhaka-Mymensingh highway at the Hazi Mazar slum in Tongi of the district in the early hours of today.

According to the slum dwellers, the fire broke out around 4am and soon engulfed the adjacent shanties.

On information, nine firefighting units rushed to the spot and brought the fire under control around 7am, after trying for 3 hours. Five people were injured in the incident.

"No casualties have been reported. We have already begun our dumping efforts," the official added.

The cause of the fire and the extent of the damage are yet to be ascertained. We are investigating the matter, he further added.