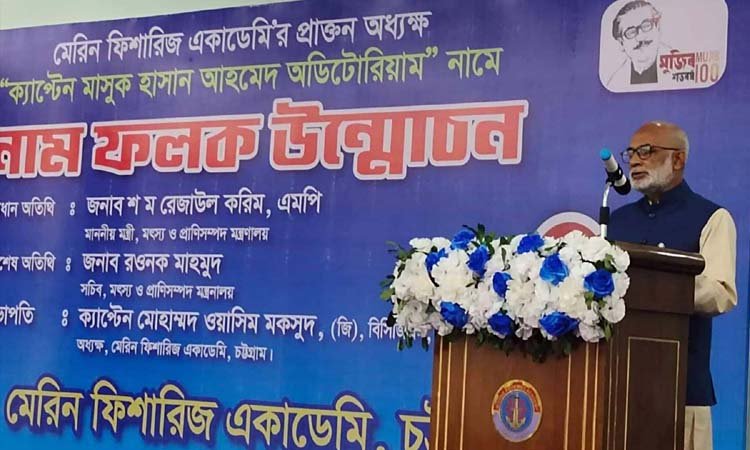 Rezaul Karim today called upon the cadets of Marine Fisheries Academy to
become ambassadors of Bangladesh so that they could uplift the image of the
country positively.

"The Marine Fisheries Academy was established by Bangabandhu Sheikh
Mujibur Rahman, the father of the nation, the architect of independent
Bangladesh. In order to build the 'Sonar Bangla' of Bangabandhu's dream, the
cadets of this institution have to become ambassadors of Bangladesh. They
have to work with honesty to brighten the image of Bangladesh at home and
abroad," he said.

The minister made the call while addressing a function at the Marine
Fisheries Academy Auditorium in Chattogram as the chief guest, said a press
release.

The minister also recalled the contribution of Captain Masuq Hassan Ahmed,
former principal of the Marine Fisheries Academy, who died of Covid-19
recently.

With Marine Fisheries Academy Principal Captain Mohammad Waseem Maqsood
in the chair, the programme was attended, among others, by Fisheries and
Livestock Secretary Raunak Mahmud as special guest.

Earlier, the minister unveiled the naming plaque of the Marine Fisheries
Academy which was named after Captain Masuq Hassan Ahmed Auditorium' and
inaugurated the newly named auditorium by cutting the ribbon.