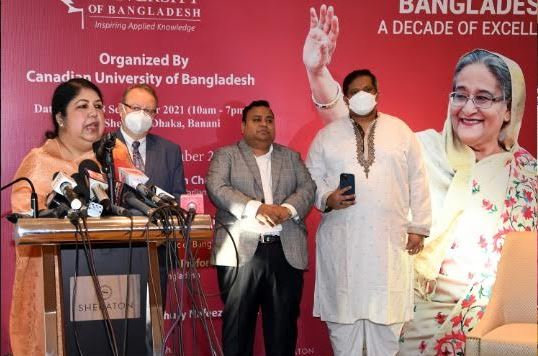 “The history on her life for democratic struggle must be spread among the new generation,” she said this after inauguration of a photo exhibition on the occasion of the 75th birthday of Prime Minister Sheikh Hasina as the chief guest.

Canadian University of Bangladesh organized the exhibition titled ‘Bangladesh: A Decade of Excellence’ in the city’s Banani area.

Founder and chairman of Canadian University of Bangladesh Dr Chowdhury Nafiz Sarafat presided over the event, while State Minister for Youth and Sports Zahid Ahsan Russell MP addressed the function as a special guest.

Canadian High Commissioner to Bangladesh Benoit Préfontaine was present as a guest of honour, while Mohammed A Arafat, Chairman of the Board of Trustees of the Canadian University of Bangladesh, gave introductory speech.

She said that the Prime Minister's deep faith in democracy and people’s support is the main driving force of her politics, adding, “In this regard, from her birth at Tungipara as a child to her education, marital life, family life, coming into politics, President of Awami League, serving as four-time elected Prime Minister and many researched topics have come to light in the exhibition.”

Earlier, in her speech the speaker also cut a cake and said that during the last decade under Prime Minister Sheikh Hasina’s leadership Bangladesh witnessed unprecedented development in various sectors including education, agriculture, establishment of Digital Bangladesh and prudent diplomacy.

Dr Shirin said that after the brutal assassination of the Father of the Nation in 1975, an attempt was made to divert the history of the country and distort the spirit of independence.

“Return of Prime Minister to her homeland with pain of losing her family on 17 May 1981, contained message of turning Bangladesh around. Since then, a new dimension was added to politics, which was a new turning point in Bangladesh’s history,” she said.

Dr Shirin said, “People of Bangla came and stood by her side, from then she started her journey. From there movement to establish democracy, rice and right to vote, struggle to end of the dictatorship, struggle for establishment of human rights under the Constitution were truly wonderful.”

Various dignitaries, concerned officers and employees of the university and media personnel were present on the occasion.

Dr Shirin Sharmin said Bangladesh today is a wonder of development to the whole world under the leadership of Prime Minister Sheikh Hasina.

The construction of the Padma Bridge with its own funds has stunned the world. She has established Bangladesh as a nation of self-reliance, the speaker added.

“Sheikh Hasina, the worthy daughter of the independent sovereign Bangladesh that we got under the leadership of the Father of the Nation, has taken the country from the least developed country to the developing country” she said.

Like her father, she loves people of this country deeply, the speaker said.

She said that Prime Minister Sheikh Hasina is working tirelessly to realize the unfulfilled dream that Bangabandhu had of putting smiles on the faces of poor people.

Under her able leadership, Bangabandhu's dream of a developed digital Bangladesh free from hunger and poverty will be established, the speaker said.