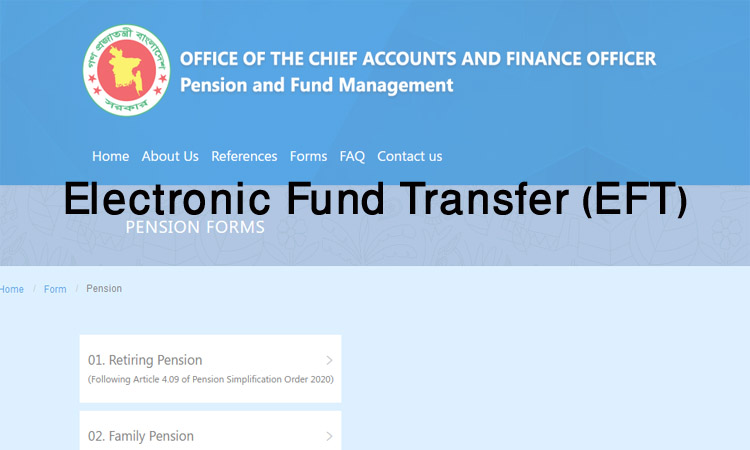 SHARIATPUR, Sept 23, 2021 (BSS) – The government’s Electronic Fund Transfer (EFT) endeavor as part of its ‘digital Bangladesh’ campaign has been godsend for retired public servants in the district as elsewhere in the country facilitating those senior citizens in hassle-free pension withdrawal.

“Once, that was like a nightmare in every month to withdraw my pension. I used to need two to three days to get my own money. But, now it’s just a matter of one time visit to bank to get the money owing to digitization,” said Alauddin Ahmed, retired headmaster of Pachukharkandi Government Primary School of Naria Upazila in the district.

Ahmed, who got retired from his teaching profession  in 2009, said, before introducing the EFT system, the retired employees had to visit the Upazila accounts office first to submit their accounts book for authorization and wait till next day for getting the authorization.

“We could not withdraw our pension money from the bank without the authorization and we had to take a long queue at the accounts office at least two times every month to get that,” Ahmed said.

In case of sickness or ailment, he said, the retired persons used to need   authorization to someone else    to go through the process on behalf of them.

“We had to spend a good share of our pension money for transportation cost for that manual bureaucratic tangles,” Ahmed said conveying thanks to the Prime Minister Sheikh Hasina for launching her  one of the ten innovative initiatives  ‘Digital Bangladesh’.

"Currently, I get notification in my mobile through text message that my pension money has been deposited to my bank accounts. I can easily withdraw money from the bank at my convenient time,” he said in a voice with full of relief and satisfaction.

It is   operated as a processing and delivery center, providing service of distribution and settlement of electronic credit and debit instruments among all participating banks.

Before the digitalization, the beneficiaries used to face extreme suffering to get their pension money due to many constraints of the accounts office mainly shortage of manpower.

Currently,  EFT software now saves both time and money of the elderly retired persons through  a hassle-free automation service.

“Those days of hardship are over as currently we are able to know that our money has been deposited at our bank accounts through our mobile phone,” he said.

He said the pension and fund management department update the list of retired personnel and send it to the district accounts office after every five to six months.

“Before introducing the EFT system, we had to work in three fronts to disburse the allowance money to the individuals. Now, the finance ministry provides the fund to the respective bank accounts of the beneficiaries through  Bangladesh Bank,” Ahmed said.

Earlier, he said, the elderly people had to visit his office at least twice in a month for getting their allocated money but now they don’t need to visit even once.

“Digitization is a blessing for these respected elderly citizens  of our society. Thanks to our Honorable Prime Minister,” said the auditor.

After inception, the EFT is gaining popularity among the corporate and government bodies as salary of more than 28 ministries and concerned offices are now being paid through the system.

Besides, the listed public companies are also paying their cash dividends through EFT network.