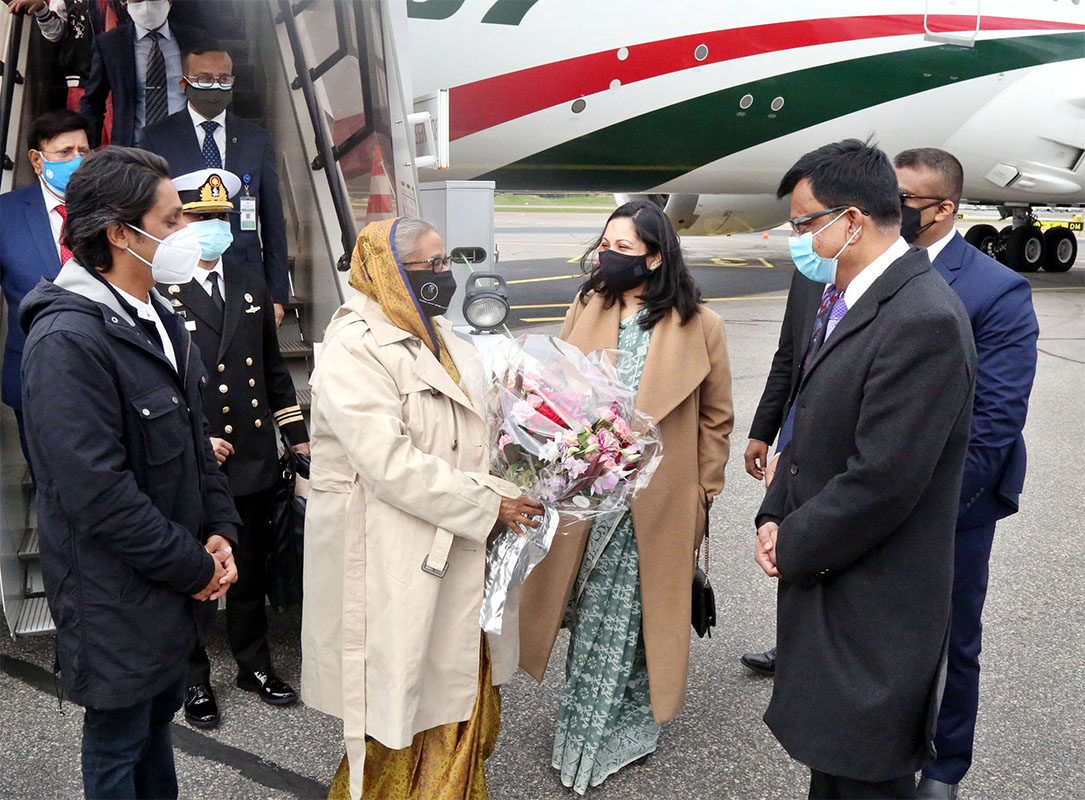 Bangladesh's Non-Resident Ambassador to Finland Md Nazmul Islam received the premier at the airport, he said.

Earlier, the flight carrying the premier and her entourage members left the Hazrat Shahjalal International Airport (HSIA), Dhaka for Helsinki at 9:23 am today.

This is the premier's maiden foreign tour after one and a half years since she visited Italy in February, 2020.

The prime minister will stay in New York from September 19 to 24 as part of an official visit to attend the UNGA and a number of high-level events there.

On the way to New York, Sheikh Hasina will make a stopover at Helsinki, the capital of Finland for two days.

The prime minister will leave Helsinki at 4pm (the Finish capital time) for New York on September 19 and is scheduled to reach John F. Kennedy International Airport in New York, USA at 6 pm local time the same day.

On September 20, Sheikh Hasina will attend a closed-door meeting with a small group of heads of state or government on climate change to be convened by UK Prime Minister Boris Johnson and UN Secretary General Antonio Guterres.

Later, she will plant a tree and dedicate a bench at the UN Gardens in North Lawn of the UN Headquarters in honour of Father of the Nation Bangabandhu Sheikh Mujibur Rahman on the occasion of his birth centenary.

In the afternoon, the prime minister is scheduled to join a virtual programme titled "Sustainable Development Solutions Network".

On September 21, Sheikh Hasina will join the General Debate's opening session at the UN Headquarters, while she will also attend the 'Business Roundtable: US-Bangladesh Business Council' to be organized by Bangladesh Ambassador to the USA.

Besides, she will participate in the 'White House Global Covid-19 Summit: Ending the Pandemic and Building Back Better' and is expected to deliver a speech in the event.

On September 23, the prime minister will attend an 'Event of Leaders' network on 'Delivering on the UN Common Agenda: Action to Achieve Equality and Inclusion' to be organised by Swedish Mission to the UN.

She will also join the Food Systems Summit as part of the decade of action to achieve the sustainable development goals by 2030 to be convened by the UN Secretary General at the UN Headquarters.

Besides, she will hold bilateral talks with UN Secretary General Antonio Guterres and President of EU Council Charles Michel.

After wrapping up her USA visit, Sheikh Hasina is expected to leave Washington for Dhaka on September 30 and will return home on October 1 following a stopover in Helsinki.