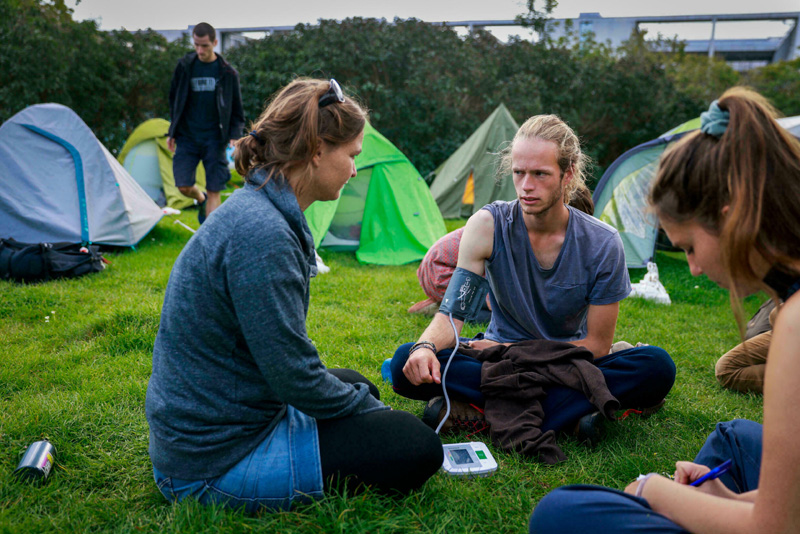 BERLIN, Sept 15, 2021 (BSS/AFP) - In late August, six young climate activists
set up tents on a stretch of grass between the Reichstag and the chancellery
in central Berlin, refusing to eat.

More than two weeks later, some look pale and emaciated. One collapsed on
Tuesday. Another broke down in tears as medics performed a daily check of
their weight and blood pressure.

Neither have they achieved their chief objective -- a meeting with the
three main candidates vying to replace Angela Merkel as chancellor when
Germany goes to the polls on September 26.

"The climate crisis kills. We are on hunger strike for an unlimited period
of time," a banner strewn across one of the tents proclaims in large red
letters.

All three parties have made climate policy a key issue in their
campaigning, and the Greens have even pledged to make climate neutrality the
top priority of the next government.

But the activists say it's not enough. For Jacob Heinze, none of the major
parties is prepared "to take the necessary measures to protect us, the
younger generation, from the catastrophe" that is unfolding.

They also want the next German government to set up a committee of citizens
representing the whole spectrum of society to develop measures to protect the
environment.

The hunger strike is a "last resort... in the face of the extreme
seriousness of our situation", the 27-year-old told AFP, long hair tied back
from his gaunt face.

Just hours later, he was taken to hospital after collapsing.

"We are sitting on a time bomb," said Hannah Luebbert, a 20-year-old
activist who is part of the support team. "If we don't change things quickly,
in a few years it will be too late."

For evidence of this, according to the activists, you only have to look at
the deadly floods that swept through western Germany in July, which experts
have directly linked to climate change.

"Food security is not something we can take for granted. We are heading for
wars over the distribution of food, water and land," said Heinze.

The school and university students aged between 18 and 27 from all over
Germany believe they belong to "the last generation" that can still take
action.

After that, they say, scientific research has shown that the dramatic
consequences of global warming will become irreversible.

For them, civil disobedience movements like Extinction Rebellion and
Fridays for Future do not go far enough. Some have already carried out
drastic stunts such as scaling political buildings or chaining themselves to
the streets to block traffic.

"But we have seen that these different forms of action have not led to any
change" at the political level, Luebbert said.

Gathered in a circle on the lawn, some of the activists chose to remain
inside the tents that have become their makeshift homes. On the 15th day of
their strike, they decided to up the ante by giving up the vitamin drinks
they had been taking.

"I think we're noticing the aftermath and next week is going to be really
grim and hard," says Henning Jeschke, an activist who has posted several
videos of the action on Twitter.

The only response they have had so far is a phone call from Baerbock. "But
even with the Greens we will not meet the climate targets we have to meet,"
said Luebbert.