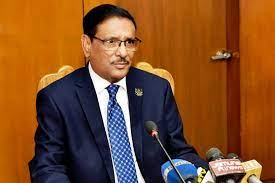 GAZIPUR, Sept 3, 2021 (BSS) - Road Transport and Bridges Minister Obaidul Quader today hoped that the Bus Rapid Transit (BRT) service from Gazipur to Dhaka airport would be opened in the next year along with much-anticipated mega projects --Padma Bridge, Metro-rail and Karnaphuli tunnel.

He said this while visiting the ongoing works of BRT Project at Tongi in the district.

Quader, also the Awami League General Secretary, said the ongoing construction work of the BRT project from Gazipur to Hazrat Shahjalal International Airport in Dhaka is causing huge sufferings for people of Gazipur and northern districts.

The drainage system on either side of the road remains in very bad condition which is coupling the public sufferings in this monsoon, he said.

“Though the people are suffering a lot during this monsoon, I hope they won’t have to suffer in the next monsoon. Vehicles will run smoothly on this road in the next year,” he added.

The minister said the BRT project progress work stands at 63.27 percent. “I hope the Prime Minister will be able to inaugurate the BRT project in December next year along with the much-anticipated major mega projects -- Padma Bridge, metro-rail and Bangabandhu Sheikh Mujibur Rahman Tunnel beneath river Karnaphuli in Chattogram. We are waiting for that,” he said.