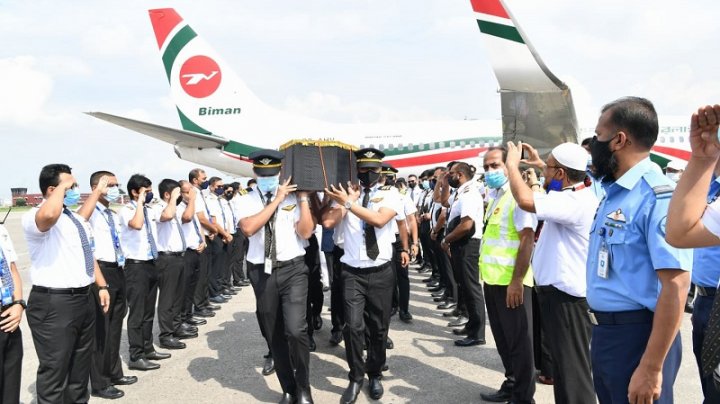 DHAKA, Sept 2, 2021 (BSS) – The body of Biman’s pilot Captain Nawshad Ataul Quaiyum, who passed away in India following a mid-air heart attack, arrived here this morning and was later buried in Banani graveyard in the afternoon.

A Biman airlines flight operated by Boeing 737 Moyorpakhi carried the coffin of its late pilot from India and landed at Hazrat Shahjalal International Airport (HSIA) here at 9:15 am.

State Minister for Civil Aviation and Tourism Mohammad Mahbub Ali, senior officials of the national flag carrier, two sisters of Captain Nowshad and his daughter were present at the airport.

The state minister, Biman’s high officials along with pilots of the national flag carrier and two other local private airlines - US-Bangla Airlines and Novoair - paid their last respect by placing wreaths at the coffin at the airport.

Later Captain Nawshad was buried at Banani graveyard this afternoon after two Namaj-e-Janajas, held in Uttara and on the premises of Biman’s headquarters Balaka consecutively.

Captain Nawshad, the 44-year-old pilot, passed away on Monday at Kingsway Hospitals in the Indian state of Maharashtra after fighting for life for four
days as he was in "coma" in the hospital following a brain hemorrhage.