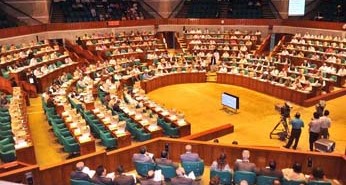 SANGSAD BHABAN, Sept 2, 2021 (BSS) – The 11th Jatiya Sangsad on the second day of its 14th session today unanimously adopted obituary reference on ruling party lawmaker Hasibur Rahman Swapan of Sirajganj-6 who died early this morning at the age of 67.

Speaker Dr Shirin Sharmin Chaudhury moved the obituary reference at the beginning of the session with a brief resume of Hasibur Rahman, as the veteran freedom fighter breathed his last at around 3:15 am while undergoing treatment in Turkey.

The Speaker while moving the reference said the House expresses its deep shock at the death of the lawmaker, also a former Deputy Minister for Industries during the seventh parliament.

Sirajganj-6 , MP, Swapan who was elected parliament member for three times  during the seventh, tenth and eleventh parliament, had been hospitalised in Dhaka for sometime after contracting COVID-19, Sirajganj Awami League Publicity Secretary Shamsuzzaman Alo told  the media.

Recently, he was shifted to a hospital in Turkey for advanced treatment. He died there early on Thursday morning.

In addition to holding the parliamentary seat for Sirajganj’s Shahjadpur, Swapan was also the president of the upazila Awami League unit.

Earlier, conventional discussion was also held in the parliament on the life and works of the distinguished lawmaker.

They conveyed deep sympathy to the members of the bereaved family and prayed for the eternal peace of the departed soul.  Hasibur Rahman Sawpan left behind his wife, three daughters and a host of relatives and admirers to mourn his death.

The lawmakers also observed a one-minute silence as a mark of respect to the departed soul.

Later, a munajat was offered by State Minister for Religious Affairs Faridul Huq seeking eternal peace of the departed soul.

As a mark of respect to the death of a sitting member, after adoption of the obituary reference and munajat, the speaker adjourned the sitting of the house at 11:51am to resume it again on Friday at 4:30pm.