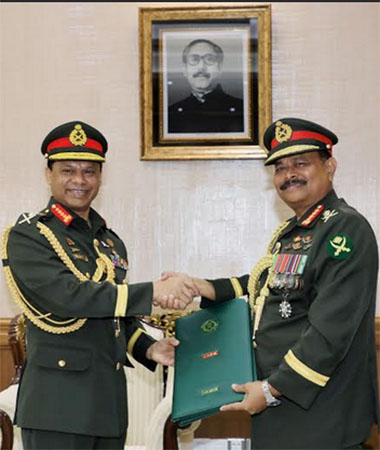 After assuming office, the newly appointed Chief of Army Staff General SM Shafiuddin Ahmed paid homage to the memory of the members of the Armed Forces who were martyred in the Great Liberation War of 1971 by placing floral wreaths at Shikha Anirban. He was then given a “Guard of Honor” by an army contingent at Senakunja and planted a sapling there, the press release said.

Earlier in the morning, Chief of Naval Staff Admiral M Shaheen Iqbal and Chief of Air Staff Air Marshal Shaikh Abdul Hannan adorned the newly appointed Chief of Army Staff with the rank badge of ‘General’ in the presence of Prime Minister Sheikh Hasina at Ganabhaban in the capital.

General Shafiuddin Ahmed was commissioned on December 23, 1983, from Bangladesh Military Academy with the 9th Long Course. He started his military career after joining the East Bengal Regiment in the operation area in the Chittagong Hill Tracts after the post-commission.

He holds a Bachelor's Degree from the Defense Services Command and Staff College as well as a Master's in Defense Studies from the National University and an MPhil from the Bangladesh University of Professionals (BUP) under the course of Development and Security Studies with outstanding results in the first division. He is currently studying Ph.D. under BUP. General Shafiuddin Ahmed received an MBA degree from the University of Dhaka with first place and MIST Gold Medal.

He successfully completed the Defense and Strategic Studies course from the National Defense University (NDU) of China in 2010 and the Army Staff course from the Defense Services Command and Staff College in Mirpur. He also graduated from NDU, Washington.

General SM Shafiuddin Ahmed, in his colourful career, served as General Officer Commanding (GOC), Army Training and Doctrine Command, the only logistics formation in the Bangladesh Army and commanding the 19th Infantry Division.

He also served as the Director General of the Bangladesh Institute of International Studies (BIIS).

General Shafiuddin Ahmed, as a Pioneer Deputy Force Commander of the Bangladesh Army, led the multinational force in the United Nations Multidimensional Integrated Stabilization Mission in Central Africa (MINUSKA) from 2014-2016.

He served with great success as the Chief of Doctrine Division of the Army Training and Doctrine Command (ARTDOC) and as the Director of the Directorate of Military Training at the Army Headquarters.

Prior to taking over as Chief of Army Staff, he served as Quartermaster General in the Army Headquarters.

In his personal life, General SM Shafiuddin Ahmed is married and a proud father of two daughters.