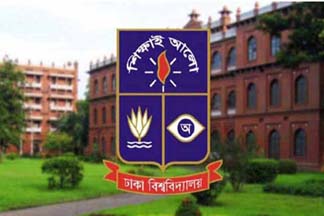 Allocation for research has been increased by Taka 1.5 crore to Taka 11 crore in the FY22 against the current fiscal year's Taka 9.5 crore.

DU treasurer Md Mamtaj Uddin Ahmed placed the new budget in the annual session of the university senate with vice-chancellor Md Akhtaruzzaman in the chair at the Sir Nabab Nawab Ali Chowdhury Senate Bhaban this afternoon.

Like the previous years, a big chunk of the budget will be spent for salary and allowances of teachers and officials-employees of the university.

Altogether, 83.74 per cent of the budget, that is about Taka 696.54 crore, has been sanctioned by the University Grants Commission (UGC) and 7.81 per cent, or Taka 65 crore, will come from the university's internal sources while the rest Taka 70.25 crore or 8.45 per cent has been shoed as the deficit.