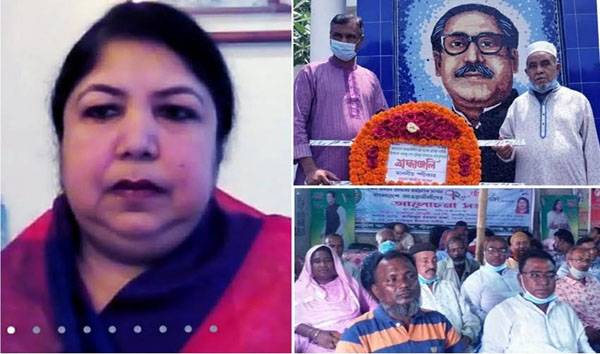 RANGPUIR, June 23, 2021 (BSS) – The country’s present massive developments have come through the hand of Awami League (AL), the people's organization founded by the Father of the Nation Bangabandhu Sheikh Mujibur Rahman.

“Beginning from the Language Movement, all achievements including the War of Liberation and current developments of the country, have come through the hand of AL,” Jatiya Sangsad Speaker Shirin Sharmin Chaudhury, MP, said today.

The Speaker was virtually addressing a discussion organised by Pirganj upazila AL at its office in Pirganj municipality of Rangpur district marking celebration of the 72nd founding anniversary of Bangladesh Awami League as the chief guest.

The Speaker called upon all to work in unison to take the country forward on the path of sustainable development by upholding the tradition and glory of the Awami League.

“Bangladesh is on the development highway now as a result of all the initiatives taken by Prime Minister Sheikh Hasina to build the ‘Sonar Bangla’ as dreamt by Father of the Nation Bangabandhu Sheikh Mujibur Rahman.

Leaders and workers of all levels of the party and its associate bodies should have to work tirelessly for proper implementation of the steps taken by Prime Minister Sheikh Hasina being inspired by the ideals of Bangabandhu.

“I firmly hope that the country will be able to reach its goal through the joint efforts of all,” she said.