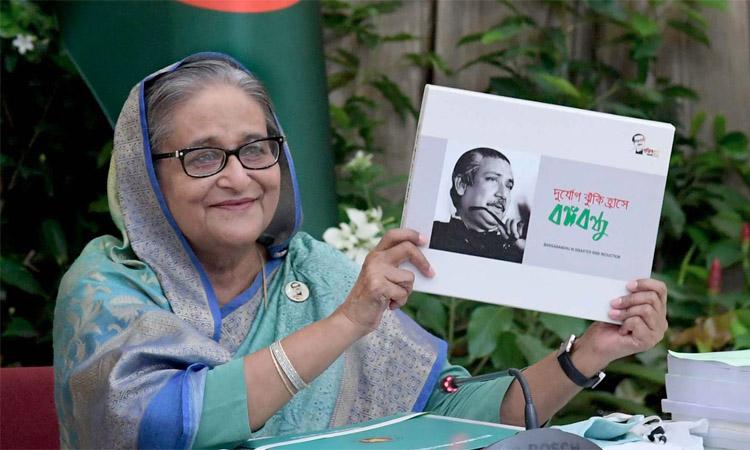 “We have taken planned measures for implementing the SDG and included it in the five year plan keeping in mind country’s development,” she said.

She added various measures were also announced in the declaration letter, constitution and election manifesto of the Bangladesh Awami League keeping the country’s development in mind.

“We have been taking effective measures to implement those since assuming office for which Bangladesh is among the (top) three countries in implementing SDG,” she said.

Other concerned got connected to it from NEC conference room.
Mentioning that Bangladesh was in an advanced position in implementing the Million Development Goals (MDGs), she said, “We’re approaching the SDGs in the same way.”

Sheikh Hasina, also President of the AL said whatever Bangladesh has so far achieved was possible due to collective efforts of all that included countrymen, her party’s leaders and activists alongside the civil and military officials and law enforcement agencies members.

The Prime Minister thanked all concerned for accepting the decisions taken by her government and working sincerely for their execution.

In this connection, she said her government, on the one side, is facing global Coronavirus pandemic alongside giving protection to the people and on the other side, also running the country’s economy, which was possible for collective efforts of all.

She said that Bangladesh is dealing with lots of problem that included manmade ones which it did in the past and pledged to take Bangladesh ahead facing all the hurdles, saying, “Bangladesh is being taken forward and will definitely advance.”

The Premier said, “Measures taken by Father of the Nation Bangabandhu Sheikh Mujibur Rahman (in reducing risks of disasters) is an example for not only Bangladesh, but for any disaster-prone area in the world.”

She said that the people of Bangladesh could face any sort of storm, tidal surge, cyclone and natural disaster as Bangabandhu taught Bangladeshis in this regard.

Describing the measures taken by Bangabandhu in addressing any disaster as a milestone for Bangladesh, Sheikh Hasina said that her government has been taking every measure to face disasters following the footsteps of Bangabandhu.

The Premier added: “We have been managed to protect lives of the people (from the natural disasters) and have got self-confident to face any natural disasters due to the measures and the plans taken by the Father of the Nation.”