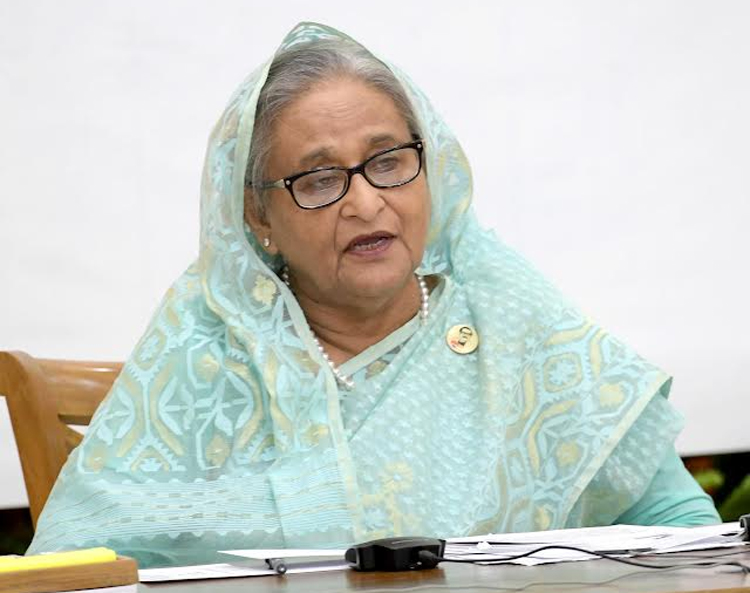 DHAKA, June 26, 2022 (BSS) - Prime Minister Sheikh Hasina today called upon the new generation to be prepared with the knowledge of science, technology and research to lead the country towards prosperity utilising their hidden talents.

"Our worthy children should be prepared with the knowledge of science, technology and research to lead the country in future. Hope you all will flourish your hidden talents in every sector and forward the country to make sure that Bangladesh doesn't lag behind anymore," she said.

Expressing her heartiest greetings to the winners, she said, "Your hidden talents are the future of our country."

The premier asked all concerned to find out hidden talents, saying, "Our children have plenty of intelligence and they are born in the era of technology. So, you should focus on searching hidden talents and utilising those for country's development."

Against the backdrop of global advancement in science and technology, she said Bangladesh has to keep pace with the evolution.

"So, we have to work on education and research of science, health, water resources, agriculture and others. We are giving most importance to the research," she said.

She also referred to her government's first separate allocation of Tk 12 crore for research particularly on agriculture to make Bangladesh self-reliant in food production after assuming power in 1996.

The premier mentioned that they allocated Tk 100 crore in the budget the next year (1997) for research, saying, "Research can show us the path (of prosperity and advancement)."

She went on saying that innovative thoughts among children can advance Bangladesh ahead.

"The new generation can march the country ahead through practice of science and technology," she said.

The premier said her government has taken various measures such as establishing science and technology universities, institutes, maritime university and medical university across the country mainly to inspire the students in science education as they found less interest among the children about science after assuming power in 1996.

Describing the talent hunt competition as a marvelous system to reach grassroots talents, the prime minister thanked the organisers to include specially able children in the competition as it is one of the steps to bring them in the mainstream of the society.

She stated that the differently able children have huge talents, saying, "We have to find out the talents in them and use their potential in country's development."

Sheikh Hasina called upon the new generation to prepare their mindset to work with all, especially the differently able children for the advancement of the country.

"I am telling the new generation that we have to mix and work with all of them to ensure our development," she added.

Mentioning that her government has transformed Bangladesh into a developing nation and has been working to make it a developed one by 2041, she said, "You (new generation) are the soldiers of 2041."

She also said her government has been implementing Delta plan-2100 to ensure an improved and secured life for generation after generation.

The prime minister said the Father of the Nation had given the most importance on education particularly on science, technology and vocational education in building the nation immediately after announcing education as the weapon of reducing poverty.

As part of his (Bangabandhu's) move, she said Bangabandhu incorporated education as the basic rights in the country's constitution that was prepared by only nine months after independence.

The premier said that Bangabandhu had also prepared an education policy which he could not implement as he along with most of his family members had been assassinated on August 15, 1975.

Following the footsteps of Bangabandhu, she said her government had nationalised 26,993 primary schools across the country and is distributing books free of cost and giving money to 1.40 crore students directly through their mother's cell phone alongside providing stipends and scholarship to two crore more students.

Sheikh Hasina said her government has given the topmost priority on the education sector as they consider education as the most effective weapon to wipe out poverty from the country.

Fifteen students out of 7680 participants have been awarded in 2022 with a cheque of Tk 2 lakh each, certificates, crest and medal while 117 others who took part in the competition also got Tk 30,000 each along with other benefits.

On behalf of the prime minister, the education minister handed over the awards among 15 winners in five categories.

Two students on behalf of 15 awardees also expressed their feelings to win the competition.

A video documentary on the Bangabandhu Talent Hunt was screened on the occasion.

At the directive of the prime minister, the nationwide talent hunt competition started in 2013 aimed at finding out grassroots level talents among the secondary and higher secondary students and inspire them to use their intelligence in nation building activities.

The competition was renamed as Bangabandhu Talent Hunt Competition marking the birth centenary of Father of the Nation Bangabandhu Sheikh Mujibur Rahman and golden jubilee of the country's independence in 2020. The competition was not held for two consecutive years, 2020 and 2021 due to the outbreak of the global Coronavirus pandemic.