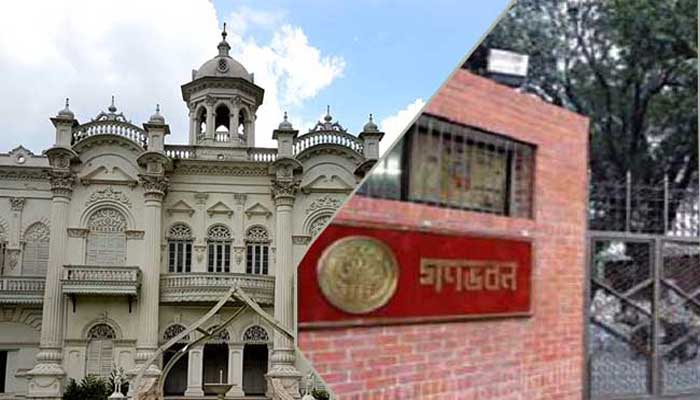 DHAKA, June 22, 2021 (BSS) - Bangladesh and Awami League (AL) is invariable and also an inseparable part of Bangalee nation and the history of the party means the story of struggle and glory of the Bangalees.

Awami League, which will mark its 72nd foundation anniversary tomorrow, was the torchbearer of glorious history and heritage of all democratic movements of this soil.

The country achieved independence under the leadership of this oldest and biggest political party.

Awami League is not only the country's oldest and biggest political party, rather it is the pioneer of democratic and non-communal spirit of this soil.

From the very beginning, Awami League has been leading the socio-political trend of the country amid different struggles and movements in the seven decades.

After the Liberation War, the party's leader Bangabandhu Sheikh Mujibur Rahman, Father of the Nation, began to build Bangladesh as a non-communal country.

Following the footprints of her father's ideology, Prime Minister Sheikh Hasina is taking ahead the country in an indomitable speed towards massive development and progress.

On June 23 in 1949, from a meeting of the supporters of Hussein Shaheed Suhrawardy at the Rose Garden of KM Das Lane, Old Dhaka, a new political party named Awami Muslim League was formed.

It was the first opposition party in the then East Bengal (later renamed East Pakistan).

Maulana Abdul Hamid Khan Bhashani and Shamsul Haq of Tangail became the party’s President and General Secretary respectively while Sheikh Mujibur Rahman was made Joint Secretary from the jail.

In a process of secularization, the word "Muslim" was later dropped from the name of the party.

Bangabandhu Sheikh Mujibur Rahman came to the leadership of Awami League amid 1966 Council.

Later, he became the unparalleled leader of Bangalee nation and architect of independent Bangladesh and Father of the Nation.

Awami League led the Mass Upsurge against the Pakistani occupied force in 1969, prompting it to join the Liberation War in 1971 to free the people from the centuries-old subordination.

After the assassination of Bangabandhu and most of his family members on August 15, 1975 and killing of four national leaders inside the Dhaka Central Jail on November 3 in the same year, Awami League became leaderless.

Bangabandhu's daughter Sheikh Hasina took the helm of Awami League after returning to the country in 1981.

She again united the party. She has been leading the party for three decades and formed the government three times side by side with waging different democratic movements.

After the independence, Awami League was in power around three and a half years before the assassination of Bangabandhu and five years from 1996 to 2001 under the leadership of Sheikh Hasina and since 2009 to present.

After the defeat in the 2001 general election, Awami League waged a successful movement against the then BNP-Jamaat led alliance government.

In 2007, the military-backed caretaker government declared a state of emergency. Awami League President Sheikh Hasina and top leaders of the party were arrested. As a result, the party was in crisis in this period.

But, overcoming all hurdles and hostilities, Awami League and grand alliance under the leadership of Sheikh Hasina achieved a landslide victory on December 29, 2008 national election.

On January 6, 2009, a grand alliance led by Awami League formed the government.

In the general election on December 30 in 2018, the people of Bangladesh again gave their absolute mandate to the Awami League to form a government for a record third straight term. Awami League President Sheikh Hasina became the prime minister for the fourth time and third in a row.

As per the electoral pledges, Awami League government has been working relentlessly to build a poverty and hunger free, advanced and ICT- based, prosperous Bangladesh and thus turn the country into a developed one by 2041.