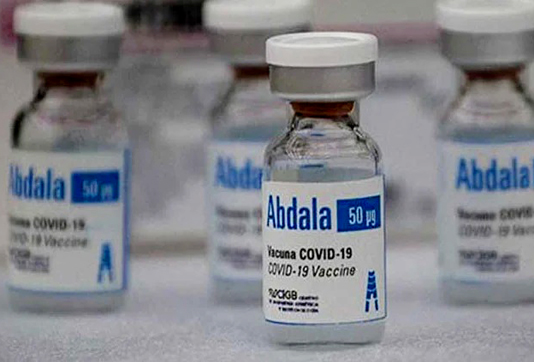 HAVANA, June 22, 2021 (BSS/AFP) - Cuba's Abdala coronavirus candidate vaccine showed "efficacy" of more than 92 percent after three doses, its maker said Monday, though it did not specify whether this was measured against infection, disease, or death.

Cuba is working on five coronavirus vaccines, and last month started immunizing its population using two of them yet to complete clinical trials.

On Monday, the BioCubaFarma laboratory tweeted that Abdala -- one of the two already in use -- "shows an efficacy of 92.28 percent in its three-dose scheme".

The World Health Organization has set a 50-percent efficacy threshold for coronavirus vaccines to offer protection against the virus or disease.

The announcement came two days after authorities announced that Soberana 2, the other three-dose shot being developed in Cuba, was 62 percent effective after the first two shots.

Cuban President Miguel Diaz-Canel welcomed the news as an achievement which "will multiply pride" in the communist island nation.

Cuba has been relatively unscathed by the outbreak but has seen a recent sharp increase in cases, registering one of its worst days Monday with 1,561 confirmed infections in 24 hours. To date, it has recorded just over 169,000 cases and 1,170 deaths.

Under American sanctions, Cuba has a long tradition of making its own vaccines, dating back to the 1980s.

Nearly 80 percent of its vaccines are produced locally and it hopes to come up with the first locally-produced coronavirus shot in Latin America.