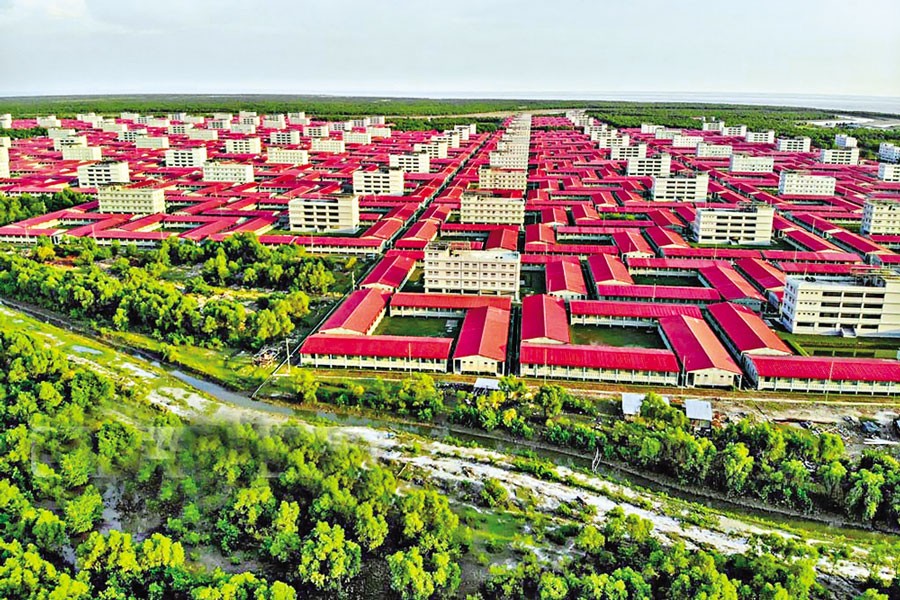 DHAKA, Oct 9, 2021 (BSS) - Bangladesh government and the United Nations
(UN) today signed a Memorandum of Understanding (MoU) to establish a common
protection and policy framework for humanitarian response to Rohingya in
Bhasan Char.

The MoU was inked between the country's disaster management and relief
ministry and the UNHCR, on behalf of UN agencies working on the Rohingya
response in Bangladesh, at the secretariat here.

The MoU is a further expression of the government and people of
Bangladesh's generosity and support toward the Rohingya population until they
can return safely and sustainably to Myanmar, said an UNHCR media release
after the signing ceremony.

The MoU is also a reconfirmation of the UN's commitment to continue
supporting Bangladesh in leading the humanitarian programme for almost
900,000 forcefully displaced Rohingyas in the country, it added.

The agreement relating to Bhasan Char allows close cooperation between the
government and the UN on services and activities to benefit the increasing
numbers of Rohingyas living on the island.

The MoU covers key areas of protection, education, skills-training,
livelihoods and health, which will help support Rohingyas to lead decent
lives on the island and better prepare them for sustainable return to Myanmar
in the future.

The UN response will build up and complement the humanitarian assistance so
far provided by Bangladeshi NGOs on the island, said the release.

Prior to signing the MoU, the UN has held discussions with the Rohingya
community in Cox's Bazar, as well as those already on the island, including
during the UN visit to Bhasan Char in March 2021, to better understand their
needs and views.

These discussions, as well as those with Government counterparts and
Bangladeshi NGOs working on the island are expected to continue on a regular
basis and further inform any humanitarian and protection responses on Bhasan
Char, said the UNHCR.

The statement said the UN encourages the international community to
increase its generous support to the humanitarian response in Bangladesh,
recognising that the Joint Response Plan for the Rohingya Humanitarian
Response in Cox's Bazar is currently less than half funded for this year.

This support should continue until they (Rohingyas) are able to return to Myanmar
in a safe, voluntary, dignified and sustainable manner, which remains a
shared priority of the UN and Government of Bangladesh, as well as the desire
of the Rohingyas in the country, it added.

Bangladesh Navy has implemented the Ashryan-3 at Bhashan Char, an island of
Bay of Bengal, at the cost of Tk 3100 crore for accommodating 100,000
Rohingyas while so far nearly 20,000 Rohingyas have been relocated in the
island from Cox's Bazar.

A total of 120 brick-built cluster villages and 120 cyclone shelters,
facilities for education, hospital, farming and fishing, playground and
presence of law enforcers make the island a much better living place for the
Rohingyas than that of Cox's Bazar camps.

Since August 25 in 2017, Bangladesh is hosting over 1.1 million forcefully
displaced Rohingyas in Cox's Bazar district and most of them arrived there
after a military crackdown by Myanmar, which the UN called a "textbook
example of ethnic cleansing" and other rights groups dubbed as "genocide".

Bangladesh so far provided the neighbour biometric data of 8,30,000
Rohingyas while the Myanmar authority by now verified only 42,000 of them.

Myanmar, however, is yet to return a single Rohingya in the last four
years while repatriation attempts failed twice due to trust deficit among the
Rohingyas about their safety and security in Rakhine state.