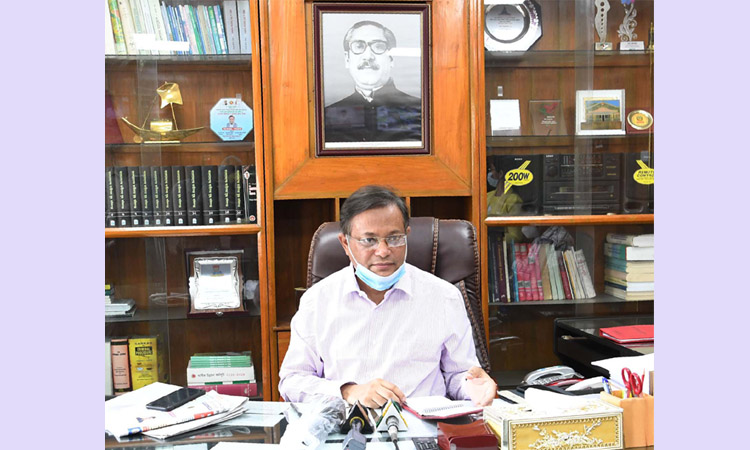 DHAKA, Sept 5, 2021 (BSS)-Information and Broadcasting Minister Dr Hasan Mahmud today said BNP is deceiving the people over the grave of Ziaur Rahman as his body is not there.

“This is an un-Islamic work… The issue was discussed in the Jatiya Sangsad (JS) on Saturday. BNP is cheating the people as Zia’s body is not there,” he told reporters at his official residence in the city’s Minto Road before leaving for New Delhi on an official visit.

Secretary of the Ministry for Information and Broadcasting Md Mokbul Hossain was present there.

Hasan, also Awami League joint general secretary, said no one saw the dead body of Ziaur Rahman, adding: “I’ve newspaper cuttings of that time in my mobile phone and it was reported that nobody witnessed the body of Zia”.

He said Tareque Rahman was wailing to see the body, but he was not allowed. “Even, Begum Khaleda didn’t see the body. Nobody witnessed the dead body of Zia.”

The minister said the then chairman and a witness Jahir of Rangunia is still alive and he said that the body was exhumed but they didn’t see the dead body of Zia. In fact, they (BNP) are doing politics standing on falsehood, he added.

He said the people will judge it. “Let them prove as they are claiming. But, they didn’t do that. Earlier, BNP used to visit the place (grave) on special days. But now they are visiting the place every week and fighting sometimes,” Hasan added.

Criticising a comment of BNP leaders, the minister said their unity has always been with militants, Jamaat and fundamentalist groups who want to make the country as a Taliban state. The unity till exists, he said, adding in fact, the statement made by Zafarullah after the occupation of Kabul by the Taliban is the statement of BNP.

About the implementation of clean feed of foreign TV channels, Hasan said a meeting was held recently with the authorized distributors of foreign channels, cable operators and DTH service providers.

And it was informed that actions would be taken if they don’t run ad-free (clean feed) contents of foreign TV channels from October 1 and don’t obey the rules and regulations of cable operating license, he said.

Hasan said it is their responsibility to obey the law. Besides, a circulation has been issued to deposit to the government’s treasury Taka two lakh for every foreign artiste for making advertisements and Taka 20,000 for screening the ads, he added.

The minister is expected to return home on September 9 after holding meetings with the Indian foreign minister, information and broadcasting minister and foreign secretary.