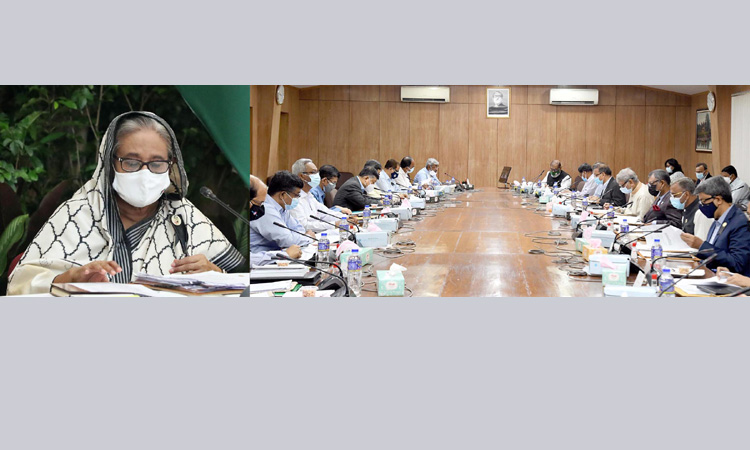 DHAKA, Aug 23, 2021 (BSS) – Prime Minister Sheikh Hasina today directed the authorities concerned to take a separate programme to bring the industrial workers and their family members under the Covid-19 vaccination coverage as soon as possible.

She also ordered to consider for reducing the existing two-month duration between two doses of inoculation.

The premier made these directives at the weekly cabinet meeting held at the Secretariat. She chaired the meeting joining virtually from her official residence Ganabhaban.

Cabinet Secretary Khandker Anwarul Islam briefed the newsmen at the Secretariat about the outcome of the meeting.

“A special discussion was held over the industrial workers (in the meeting) . . .  Since Bangladesh would get six crore more doses of vaccine from Sinopharm as per an agreement signed by the Health Ministry, the prime minister gave an instruction to vaccinate the workers quickly,” said the Cabinet Secretary.

Mentioning that the Prime Minister would herself oversee the matter, Anwarul Islam said, “She (the premier) has given instruction to vaccinate not only the workers but also their family members.”

He said the Prime Minister also directed the relevant authorities  to consider the matter whether it would be possible to shorten the existing two-month duration between two doses of inoculation on the basis of recommendation of the national technical advisory committee on Covid-19.

Mentioning that embarrassing incidents mostly happen due to miscommunication, he said, “This is why, an instruction was given to all of the field level, including administration, law enforcement agencies and public representatives to interact among them regularly.”

He continued saying, miscommunication and untoward incidents occurred due to lack of proper interaction.

The cabinet secretary said the leaders of Bangladesh Administrative Service Association (BASA) admitted that they made a mistake by using inappropriate words in their statements over the issue.

He said they sat in a meeting on Sunday where secretaries and officials differed with the statement issued by BASA and opined that such type of language should not have been used in the statement.

Anwarul Islam said, “Those who were from BASA also agreed with it (the opinion) and said it was actually a mistake.”

Stating that they don’t actually know the exact reason behind the Barishal incident, he said all parties -- local administration, mayor, commissioner and law enforcement agency -- were asked to sit together to solve the problem by finding out the reason behind this embarrassing incident.