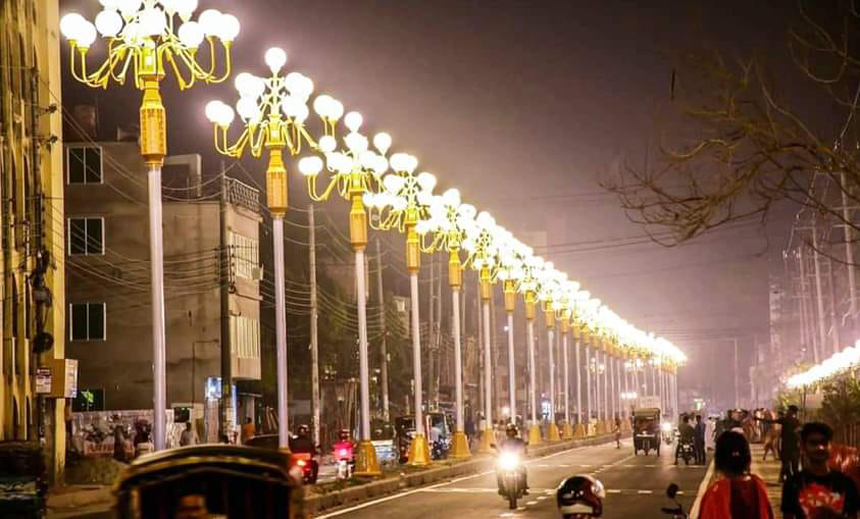 RAJSHAHI, Jan 25, 2025 (BSS) - Rajshahi city has become green, beautiful and enlightened at present amid massive infrastructural developments fully supported by the present government during the last couple of years.

Mayor of Rajshahi City Corporation (RCC) AHM Khairuzzaman Liton told BSS that an east-west connecting road has been constructed from Biman crossing to Choddopaya crossing via Chhotobangram, Meherchandi, Budhpara and Mohanpur at a cost of around Taka 189.35 crore.

In addition to construction of footpaths on both sides of the 6.793-kilometer road, various need-based modern infrastructures, including a flyover on railway crossing, a bridge, eight culverts and median, were constructed.

The newly constructed four-lane road has been playing a significant role towards mitigating the gradually mounting traffic jams in the metropolis.

Mayor Liton said Prime Minister Sheikh Hasina has given a project worth around Taka 3,000 crore and its implementation works are progressing fast in the city for its cherished development at present.

Two potential roads are being elevated to four lanes as part of the Taka 2,993-crore project aimed at making the movement of both vehicles and people quick and smooth.

RCC is turning the Bilsimla Railway crossing to City Hat road to 80-feet wide along with a four-foot-wide road divider with an outlay of around Taka 44.92 crore.

On both sides of the 3.532-kilometer road, a 44-feet road, 12-feet wide drain and footpath and 20-feet road for the slow-moving vehicles are also being constructed.

Another dilapidated 4.17-kilometer road from Naodapara bus terminal to Bhadra Railway crossing is being elevated to a smart street.

Liton said a 2.5-kilometer road from Alupatty crossing to Talaimary crossing has been elevated to four-lane. Decorated and pedestrian-friendly footpaths have been constructed on both sides of the road with setting up colourful road lights.

Island has been beautified through transplanting decorative and ornamental flower plants.


Two midtown roads from Upashahar to Sonadighi crossing and Malopara crossing to Sagarpara crossing have been widened, costing around Taka 126.40 crore bringing an epoch-making change in terms of the city's communication.

Another road from Bilsimla railway crossing to Kasiadanga crossing has been elevated to four-lane under the city's important roads development project. Side by side with the four-lane, drain, footpath and bicycle lane were constructed along the road.

Erection of butterfly road light draws the attention of the passerby in the night amazingly.

The city corporation has so far installed 1,654 decorated and eye-catching lights on 695 poles in five separate roads and streets with length of around 21 kilometers.

As a whole, the modern road lighting has brought happiness to the city dwellers and other beneficiaries.

Mayor Liton said the energy saving lights at Drishtinandan are being turned on and off automatically by the auto-logic controller, adding they also have plans for bringing the newly constructed and other widened roads under the modern lighting system in the days to come.

The city corporation has implemented drainage and approach road construction projects contributing a lot towards freeing the city from water-logging besides making pedestrian movement easy.

Problems related to unfit and narrow sections of the present drains and its low-sewerage capacity were removed. All the culverts were widened besides removing the silts from the base of the drains to enhance the sewerage capacity.

Chief Engineer Nur Islam said the physical infrastructure development were implemented for developing the overall environmental health system through building an effective and permanent water sewerage system in the city.