Stay beside people as vanguards so that none can play foul with their fate: PM 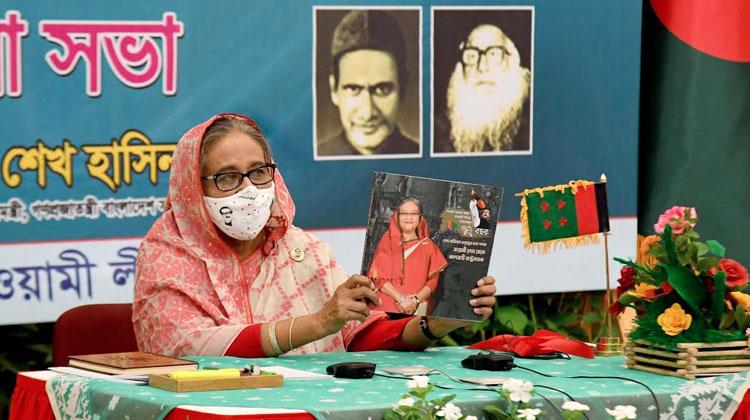 DHAKA, June 23, 2021 (BSS) – Prime Minister and Awami League President Sheikh Hasina today asked her party men to remain always beside the countrymen as vanguards so that none could play ducks and drakes with their fate anymore.

Presiding over virtually a discussion from her official Ganabhaban residence in the capital, marking the 72nd founding anniversary of the ruling the AL, the Prime Minister called upon the AL leaders and activists to work in such a way that they can change the fate of the countrymen.

Describing the AL as one of the oldest parties in the sub-continent as it has stepped into 72 years, she said that this is the party which can build the Golden Bangladesh as dreamt by Father of the Nation Bangabandhu Sheikh Mujibur Rahman.

Mentioning that the people of the country are getting food, clothing, accommodation, education and treatment as the AL is in power, she said, “They (countrymen) will again be deprived of rights if AL is no longer in power.”

So, the Prime Minister asked her party men to always remain alert about the rights of the people staying beside them in their happiness and sorrow, saying that if the AL is in power, the people of the country will certainly make more development, which will help them lead a better life.

The AL President said that the history of the independence, and all the socio-economic and cultural achievements have interrelated with the history of her party.

She added: “I think, the achievements, which we have got so far, became possible as a powerful Awami League is beside us.”

Mentioning that it is impossible for a government to do any work without having a strong political party behind it, Sheikh Hasina called upon her party leaders and activists to give a special focus on building the AL as a more stronger party from the grassroots despite facing some difficulties due to the Covid-19 outbreak.

The Prime Minister, however, came down heavily on those who are trying to ignore AL’s contribution to the country’s development, by saying, “Bangladesh is becoming a land of one party.”

In this connection, she said that if there is any political party in Bangladesh for the masses, it is the Awami League as it was formed from the grassroots people to protect their rights while BNP and Jatiya Party were formed by military dictators after assuming power illegally by violating the country’s constitution.

She said that many people said many things, but they did not consider these (formations of BNP and Jatiya Party).

The Prime Minister said that some of them are waiting for the coming of any illegal government in the state as flags can be raised in their cars.

The Prime Minister earlier unveiled the cover of a memorial documentary book titled “Sheikh Hasinar Netritter Char Dashak : Sanggrami Neta Theke Kaljoyee Rastronayok” (Four Decades of Sheikh Hasina's Leadership : From a Struggling Leader to a Time-tested Statesman) published by the Information and Research sub-committee of the AL and edited by the party's Information and Research Secretary Dr Salim Mahmud.

At the outset of the discussion, one minute of silence was observed as a mark of profound respect to the memory of Father of the Nation Bangabandhu Sheikh Mujibur Rahman, martyrs of the Liberation War and all the democratic movements.

The Awami League President said that her party survived attacks time and again as Ayyub Khan, Ziaur Rahman, HM Ershad and Khaleda Zia tried to destroy Awami League, but they all failed as the party is deep rooted into the masses.

She added: “An organization which has a goal to establish the rights of the people can’t be destroyed so easily... It is the AL which stands beside the people first and helps them fight any disaster.”

About the Covid-19 vaccine, the Prime Minister said that they are taking effective measures so that the vaccines can be reached to every person in the country, she said, adding “And we’ll do so.”

She however criticised those who are talking about the management of the vaccine urging them to keep patience and see what the government can do to ensure vaccination for all.

In this connection, the Prime Minister said that many countries across the globe are yet to collect the vaccine, while Bangladesh is one of those countries which have collected it since its advent.

She said Bangladesh's COVID vaccination efforts have been hit hard after India halted coronavirus vaccine shipments as it (India) witnessed a massive surge in Coronavirus infection and death rates.

The premier called upon the critics to understand the world situation over the vaccine issue, saying that Bangladesh earlier procured a single dose of vaccine at 4 US dollar, but now a single dose costs 15 US dollar.

Sheikh Hasina said the government has taken plans so that the vaccines can be produced locally by setting up a vaccine institute here to conduct research in this regard. “We’ll take the measures necessary to develop vaccines in future by setting up an institute,” she said.

Noting that the second wave of Covid-19 pandemic is badly transmitted throughout the country and many places across the world, she urged the people of the country to follow the lockdown instructions and health protocols even after getting vaccinated.

“You all will have to follow the lockdown that we’ve enforced. All will have to stay home. If we stay home, wear face-mask, wash hands regularly and remain conscious, then we can overcome this situation,” she said.