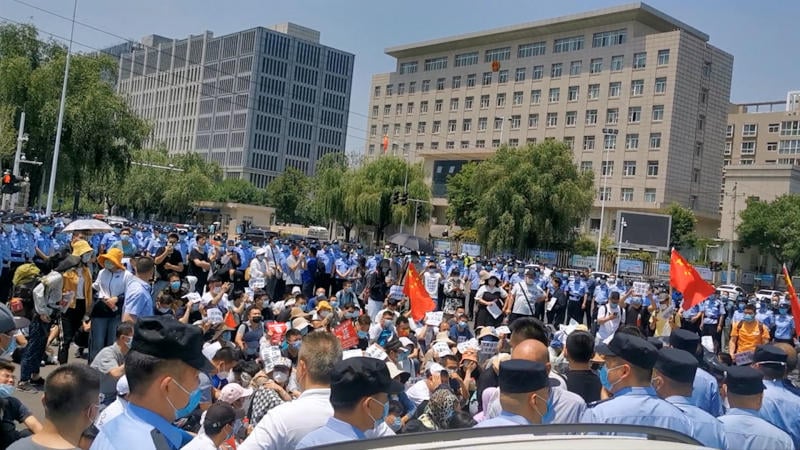 Beijing's unrelenting zero-Covid policy has caused fatigue and resentment among wide swathes of the population, some of whom have been locked down for weeks at factories and universities, or unable to travel freely.

In the videos, which AFP was not able to independently verify, hundreds of workers can be seen marching on a road in daylight, with some being confronted by riot police and people in hazmat suits.

Others show hundreds of people in hazmat gear standing on a road near what appears to be factory residential buildings, while the person filming the clip from an adjacent apartment building says: "It's starting again, from last night to this morning."

Several security personnel in protective garb appeared to be kicking a worker lying on a main road in another clip.

Video from a separate livestream showed dozens of workers at night confronting a row of police officers and a police vehicle with flashing lights, shouting: "Defend our rights! Defend our rights!"

As clouds of smoke emanate from the vehicle, the streamer can be heard saying: "They are rushing in! Smoke bombs! Tear gas!"

A clip of the same nighttime protest taken from another angle shows workers setting off fire extinguishers towards police just out of frame.

One photo taken during the day showed the charred remains of a gate, apparently burned down during the night.

The Weibo hashtag "Foxconn riots" appeared to be censored by Wednesday noon, while some text posts referencing large-scale protests at the factory remained live.

The Taiwanese tech giant, Apple's principal subcontractor, recently saw a surge in Covid-19 cases at its Zhengzhou site, leading the company to shutter the vast complex in a bid to keep the virus in check.

Footage emerged this month of panicking workers fleeing the site en masse on foot in the wake of allegations of poor conditions at the facility, with multiple employees recounting scenes of chaos and disorganisation at the complex of workshops and dormitories.

The company did not respond to an AFP request for comment on the latest unrest.