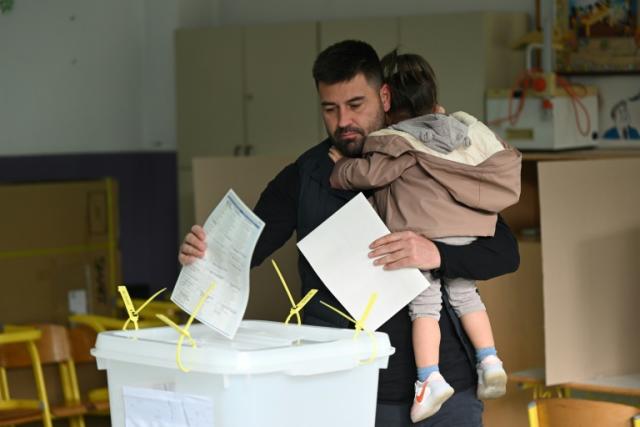 Sunday's polls saw its share of upsets including landslide victories and a surprise move by the country's high representative to amend Bosnia's election law.

As votes continued to be tallied in the early hours of Monday, long-time leader of Bosnia's Serbs Milorad Dodik appeared on the edge of defeat after his opponent Jelena Trivic claimed victory in the race for the presidency of the Republika Srpska -- the country's Serb entity.

"This is the victory of people," said Trivic before taking to the streets of the RS capital Banja Luka to celebrate with her supporters.

"This should not be my private victory but rather a victory for the RS".

Nearly three decades after war ravaged the Balkan country, Bosnia continues to be burdened by its ethnic divisions.

The Balkan state has been governed by a dysfunctional administrative system created by the 1995 Dayton Agreement that succeeded in ending the conflict in the 1990s but largely failed in providing a framework for the country's political development.

Bosnia remains partitioned between a Serb entity -- the Republika Srpska (RS) -- and a Muslim-Croat federation connected by a weak central government.

In the war's wake, ethnic political parties have exploited the country's divisions to try to maintain power.

For years, Dodik has been stoking tensions with his frequent calls for Bosnia's Serbs to separate even further from the country's central institutions, earning him fresh sanctions from the United States in January.

Dodik had been seeking his third term as the president of the RS, after completing a stint in the tripartite presidency.

Running on an anti-corruption ticket, Trivic -- a 39-year-old professor of economics -- sought to offer an alternative to Dodik's inflammatory persona, while also trumpeting the Serbs' desire to maintain their autonomy in Bosnia.

Dodik rejected Trivic's claim, saying he was confident he had won but was willing to wait for the final results.

"I'm serious enough to wait for those results. On the other side, there are a lot of people who are not serious," Dodik told supporters.

The fight over the RS presidency was not the only surprise of the evening.

The double-digit win was a stinging rebuke to Izetbegovic's SDA party that has largely dominated Bosnian politics for decades.

"We must have a mandate of development, progress and cooperation, this is what all people and nations in Bosnia and Herzegovina need," said Becirovic in his victory speech.

In the run-up to Sunday's vote, the country had been torn between secessionist Orthodox Serbs and Catholic Croats demanding greater autonomy and electoral reforms.

Ahead of the polls, many voters said the lack of young candidates offering fresh ideas had left them largely uninspired.

"Most of the candidates that are running are the ones we have been watching for the last 20 years," said Sara Djogic, a 21-year-old philosophy student in the capital Sarajevo.

"There are not many who offer something new," she added.

For the country's Catholic Croats, political turmoil has also been brewing.

Ahead of the election, many Croats have been demanding electoral reforms with the leading nationalist party HDZ threatening to boycott the contest.

Their grievances are steeped in the vast numerical advantage held by Bosniaks in the Muslim-Croat federation, which has allowed Muslim voters to hold de facto control over who can be elected to lead the Croats at the presidential level.

HDZ and other Croat parties have been calling for the creation of a new mechanism to allow the community to choose their own representatives to the presidency and upper house.

The move, however, has been fiercely opposed by the federation's ruling Bosniak party.

The incumbent Croat co-president Zeljko Komsic -- who is widely reviled by all Croat parties that view him as a Bosniak proxy -- was re-elected for his fourth term.

To add another layer complexity to the dizzying contest, moments after the polls closed on Sunday night the country's high representative announced a range of amendments to Bosnia's election law.

The foreign-appointed figure -- a position created after the war to oversee the implementation of the Dayton Agreement -- continues to hold vast powers in Bosnia, including passing laws and removing officials.

The new measures "are aimed at improving the functionality of the Federation of Bosnia and Herzegovina ... and ensuring timely implementation of the results of the October 2022 elections," said a statement released by Christian Schmidt, the high representative.