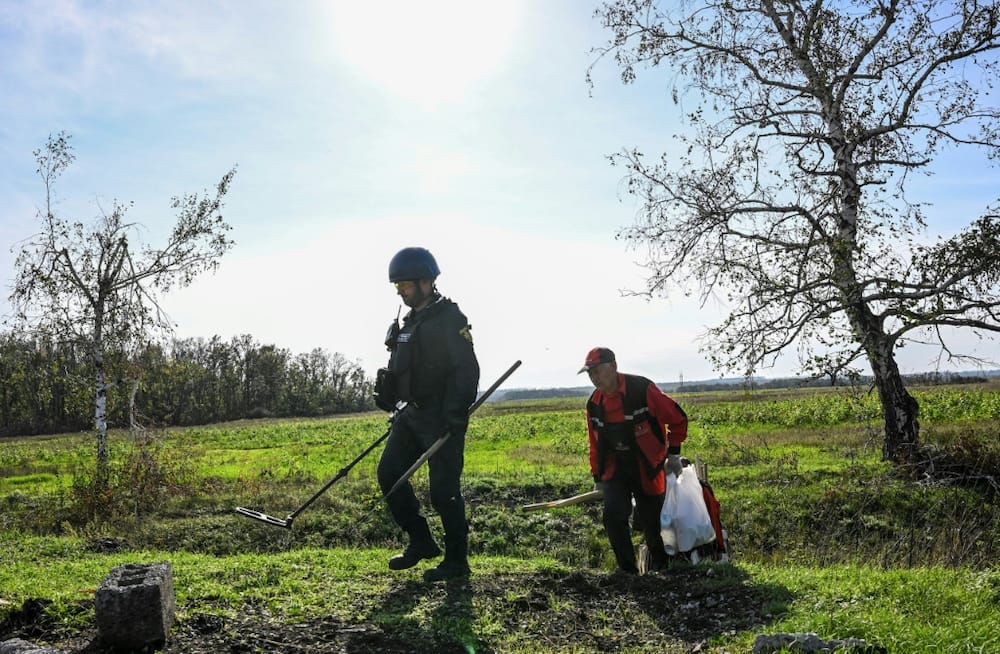 IZYUM, Ukraine, Oct 2, 2022 (BSS/AFP) - Small, hidden and lethal, mines and other explosives left behind by retreating Russian forces in eastern Ukraine pose an urgent challenge for demining teams ahead of winter.

"Without us, there is no chance of repairing services like electricity before winter," said Artem, who heads a mine-clearing unit working around recently liberated Izyum.

"We found more than 30 mines and artillery shells today, mostly shells," the 33-year-old told AFP, wiping his brow after removing his protective eyewear.

His 10-strong unit is tasked with clearing areas around damaged critical infrastructure such as electricity cables, water and gas pipes.

"Every day we start off where we finished yesterday," he said, as a team of electricity workers gingerly advanced in single file behind a mine clearer into a sunflower field and towards a broken cable.

Other colleagues stacked discovered mines with detonators safely removed beside a truck for loading and disposal.

Demining teams dot the debris-strewn road verges between Izyum, which was captured by Ukrainian forces last month after six months, and the border of Donetsk region not far down the road.

Artem, who didn't want to give his full name, spoke candidly about his team's perilous work, scanning road verges and carefully wading into tall grass fields.

"Its our job, it's what we know how to do, but now even more than ever it's our duty," he said, referring to Russia's invasion of Ukraine.

"We have 35 staff, in seven teams, from different regions of Ukraine," said Vasyl Maidyk, commander of the demining teams in Izyum district.

"Nobody knows how long the process will last," the 42-year-old told AFP at the base in Izyum.

"Despite the help of international organisations we haven't even finished finding mines left since the first phase of the conflict began in 2014," he said.

But he added that "if we work quickly", Izyum district can be cleared by November so that infrastructure can be operational again by winter.

Since the liberation of Izyum in early September, his teams have covered some 100 hectares in the district, and found over 5,000 mines from around former Russian positions.

The haul includes both anti-tank and anti-personnel mines as well as artillery shells, and, he said, "butterfly" mines, which are internationally banned.

The small green explosives with wing-like sides, known in Ukrainian as "petals", are especially dangerous, according to Maidyk, as they can be picked up by children.

Out on the road, emptied of traffic other than military vehicles headed for the front, one of Sacha's team hammers in wooden poles along the cleared verges.

"It's no more dangerous than crossing the road on a normal day," said 44-year-old Sacha with a shrug and a cigarette in his mouth.

"Now the nearest mine is two metres away, so it's safe here more or less," he said as a colleague stapled a red sign to the pole with a white skull and crossbones reading: "Danger - Mines!"