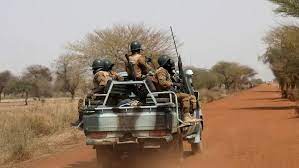 Violence has raged in the landlocked west African country after Lieutenant-Colonel Paul-Henri Sandaogo Damiba seized power in a January coup, ousting Burkina's elected leader and promising to rein in jihadists.

But as in neighbouring countries, insurgents affiliated to Al-Qaeda and the Islamic State group have stoked the unrest.

In the latest attack, a convoy carrying supplies to local residents and escorted by a military unit "was the target of a terrorist attack" near Gaskinde in the Sahel region, an army statement said.

"The attack unfortunately caused human and material losses," and a full toll would be established "as soon as possible", it said.

A security source told AFP that a preliminary toll indicated "about a dozen dead among elements of the unit. There were also a number of seriously wounded."

The source added that reinforcements had been sent to the area, both to secure it and to aid the victims.

These attacks followed one on Saturday in the country's east near the borders with Niger and Benin. The army said at least two soldiers and two civilian auxiliaries were killed in an ambush on their patrol.

Thousands have died and about two million people have been displaced by the fighting since 2015 when the insurgency spread into Burkina Faso.

Earlier this month Damiba sacked his defence minister and assumed the role himself after a series of jihadist attacks.