US to miss July 4 goal of one Covid shot for 70% adults: W.House 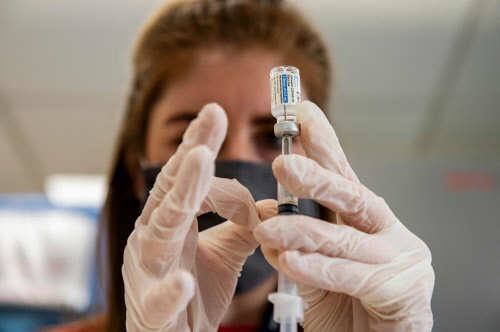 WASHINGTON, June 22, 2021 (BSS/AFP) - The administration of President Joe Biden on Tuesday conceded it won't meet its goal of administering one or more doses of a Covid vaccine to 70 percent of US adults by July 4.

"We think it'll take a few extra weeks to get to 70 percent of all adults with at least one shot," said Jeffrey Zients, head of the White House Covid response team.

As of Tuesday, 65.4 percent of over-18s had received one or more doses of the Pfizer, Moderna or Johnson & Johnson shots.

But the vaccination rate has been declining since April when it hit a peak average of 3.4 million daily shots. The latest average is around 850,000 daily shots.

Adult vaccination rates vary greatly by state. The Northeast has some of the highest uptake, with Vermont leading the charge at 84 percent partially vaccinated and 75 percent fully vaccinated.

The bottom of the table is dominated by states in the South, with Mississippi covering just 45 percent of adults with one shot and 37 percent with two.

According to nationally representative surveys carried out by the Kaiser Family Foundation, unvaccinated adults are significantly younger, less educated, more likely to be Republicans, people of color and uninsured.

Despite missing the Independence Day goal, Zients said the administration had "succeeded beyond our highest expectations" in returning the nation to a pre-pandemic normal.

"Instead of just small backyard gatherings, America is getting ready for a truly historic Fourth of July, with large celebrations planned in communities across the country," he said.

He added the White House would invite 1,000 people including military and frontline workers to celebrate the holiday at an outdoor party.

Federal indoor mask recommendations were lifted for vaccinated people in May and cases are at their lowest since the start of the pandemic.

Still, epidemiologists are worried about the rise of the Delta variant, which is more transmissible than past strains and badly hit India, Britain and other countries. It now accounts for at least 20 percent of US cases.

Current vaccines remain effective against the variant if a person is fully vaccinated, but there are fears that undervaccinated parts of the country could incubate new waves.