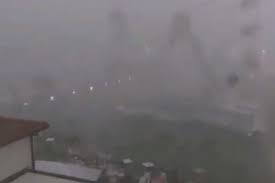 The civil protection agency prepared emergency accommodation in schools and
gyms for those forced from their homes after violent winds and rains pummelled
the area from the coast to tourist hotspot Florence, killing a man in Lucca and
a woman in Carrara, the Tuscan region said.

Both were hit by falling trees, local media reports said.

Four people were injured by toppling trees at the seaside camping site of
Marina di Massa, while four others were rushed to hospital in the mediaeval
town of Barga after the car they were travelling in was hit by a torn-off roof,
according to local news site Toscana in Diretta.

In a rare break from the searing heat, storms were felt across Italy this
week.

High winds sweeping through St Mark's Square in Venice on Thursday
dislodged fragments from its famous belltower, according to the AGI news agency.

The city of Milan meanwhile ordered public parks to be closed on Friday and
urged residents to avoid leaving their cars under trees.

Experts say climate change driven by human activity is boosting the
intensity and frequency of extreme weather events, such as heatwaves, droughts
and wildfires.