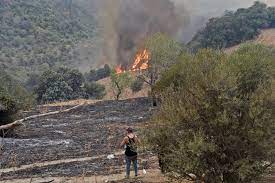 ALGIERS, Aug 18, 2022 (BSS/AFP) - The death toll from forest fires across northern Algeria has risen to at least 38, according to reports from local journalists, Ennahar television and the fire service.

Most of the deaths were in the El Tarf region near the eastern border with Tunisia, where blazes have been fanned by drought and a blistering heatwave.