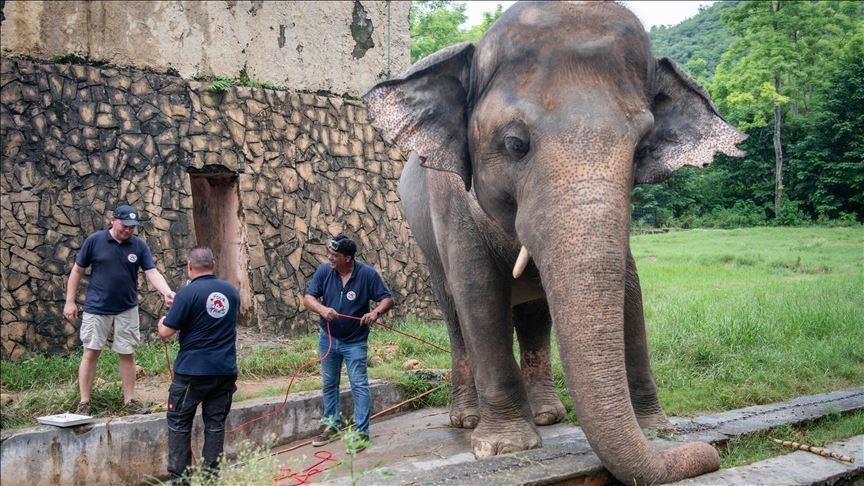 specially-designed dentist drills began operating Wednesday on a pair of
elephants "in incredible pain" at a colonial-era zoo in Pakistan.

The Austria-based Four Paws organisation was asked by the Sindh High Court to
step in to treat the animals after activists reported their miserable
condition.

Sixteen-year-old Madhu Bala -- named after a Bollywood actress -- underwent
surgery for an infection on a broken tusk after being given a delicate
standing sedation because the zoo in the southern city of Karachi lacks the
facilities and space for full anaesthesia.

"She is in the worst pain," Four Paws vet Frank Gortiz told AFP.

"On the right side there is an abscess. The root of her tusk is sticking into
her skull and the distance to her eyes is very close."

She had her eyes covered and was fastened with thick rope and propped up with
steel bars to prevent her from falling during the standing sedation, which
required specially-adapted equipment.

"We developed very long tools to be able to clean the wound," vet Marina
Ivanova said.

During the hours-long operation, Madhu Bala occasionally snorted as the team
of vets in blood-stained clothes jostled to remove the remains of the broken
tusk.

Noor Jehan -- named after the wife of Mughal emperor Jahangir -- is suffering
a similar broken tusk infection and will be operated on later in the week.

Two elephants at another nearby zoo in the port city will also be treated for
abscesses.

In April 2020, a court ordered the only zoo in the country's capital
Islamabad to shut after poor facilities and mistreatment of the animals there
were revealed.

The facility had drawn international condemnation for its treatment of an
Asian elephant named Kaavan, who was later airlifted to retirement in
Cambodia in a project spearheaded by US popstar and actor Cher, and carried
out by Four Paws.

Earlier this month, a zoo in the eastern city of Lahore called off plans to
auction 12 lions to private individuals after overbreeding, saying it would
instead create new enclosures for the big cats.