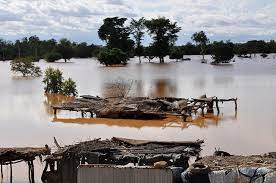 NIAMEY, Aug  16, 2022 (BSS/AFP) - Flooding and landslides during Niger's
rainy season have killed 32 people and affected more than 66,000 since June,
authorities in the Sahel state said.

Seventeen people died when their homes collapsed and 15 drowned, while 44
were injured, according to the latest figures from the civil protection
services seen by AFP.

The hardest-hit regions include Zinder in the south, Diffa in the southeast
and Tillabery in the southwest. The capital Niamey has so far been spared.
The rains have damaged or destroyed more than 7,000 homes, collapsing
classrooms, health centres, granaries and shops.

Niger, the world's poorest country by the benchmark of the UN's Human
Development Index, is often hit by floods when badly needed rains arrive.

The rainy season, which runs from June to August or September, has become
deadlier in recent years, including in the country's desert north.

Last year, at least 70 people died across the country and more than 200,000
were affected, according to local and UN figures.