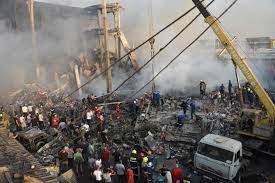 Sunday's blast at the Surmalu wholesale market also injured 60 people after
it caused a fire and the collapse of a building.

"Sixteen bodies were found during search and rescue efforts," the ministry
said in a statement, adding that 18 people were still missing.

Officials said more than 350 rescuers are at work on the ground.

The cause has not yet been established, but local news reports, citing
witnesses, said the explosion went off at a place that stored fireworks.

Local authorities have excluded the possibility that it was a terror attack
and prosecutors have already launched a probe into violations "on stocking
inflammable goods", breaches in fire safety standards and the death of people
"due to negligence".

The disaster comes as the country of three million people is still recovering
from a 2020 war with Azerbaijan, which ended in a heavy defeat and sparked a
political crisis.