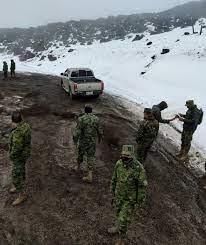 "A 47-year-old woman and two men aged 45 and 50 died in this emergency," ECU911 rescue services said in a statement.
"Due to weather conditions and nightfall, it was not possible to evacuate the bodies."

The 12 injured, aged between 39 and 58, were transferred to hospitals in the towns of Riobamba and Ambato.

The climbers were attempting to summit the central Andean volcano when they fell 60 meters (196 feet).

Carihuairazo, a 5,018-meter colossus in Tungurahua province, neighbors Chimborazo volcano -- the highest peak in the country at over 6,200 meters.

The recovery of the bodies of those who died, all Ecuadorians, will continue on Sunday.