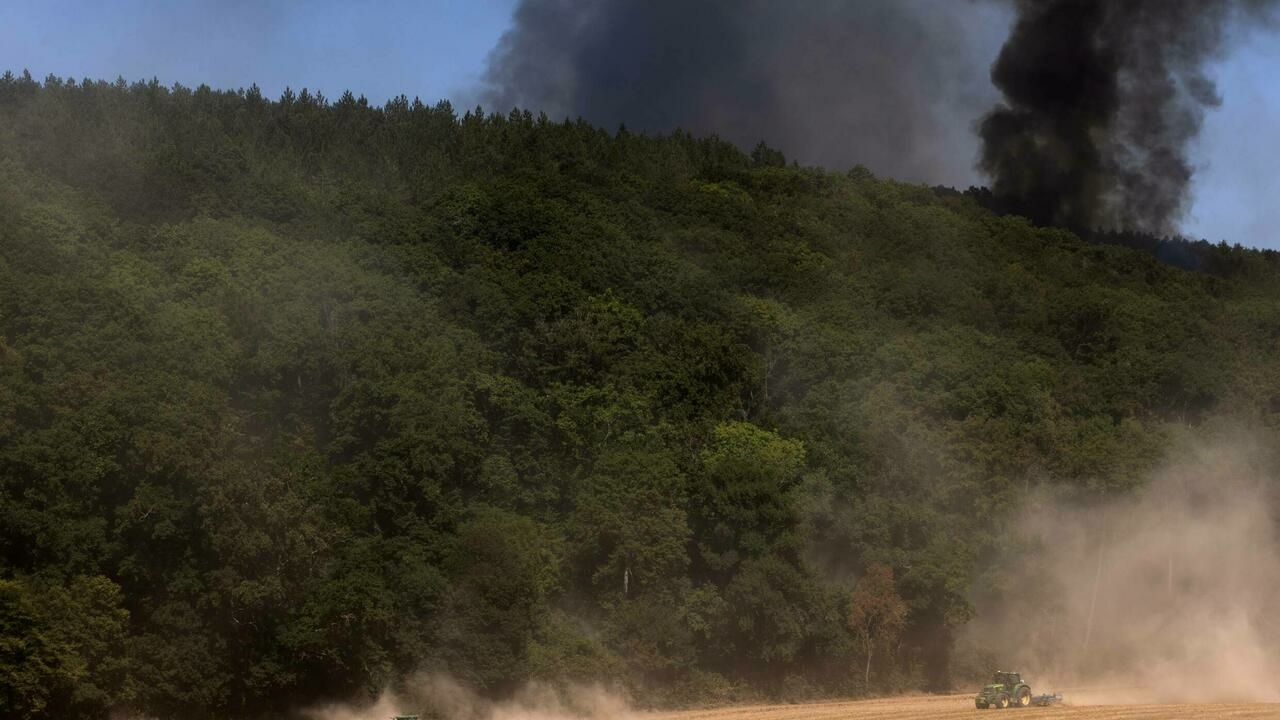 HOSTENS, France, Aug 13, 2022 (BSS/AFP) - French firefighters were keeping a wary eye on a huge blaze that appeared to be contained in the country's southwest Saturday, with thunderstorms and strong wind gusts expected in the area overnight.

France has been buffeted this summer by a historic drought that has forced water use restrictions nationwide, as well as a series of heatwaves that experts say are being driven by climate change.

The 40-kilometre (25-mile) fire front in the Gironde and Landes departments around Bordeaux "did not significantly progress overnight. Firefighters are working on its periphery," police said in a statement.

But officials said it was premature to say that the blaze -- which has already reignited once -- was under control.

"We remain vigilant" because "while we can't see huge flames, the fire continues to consume vegetation and soil," Arnaud Mendousse, lieutenant colonel of Gironde fire and rescue, told AFP.

Weather forecasters are expecting thunderstorms with wind gusts of up to 60 kilometres an hour in the region in the evening.

The wind "could reignite the fire" that "is in a state of pause," Mendousse warned.

In a bid to keep the situation contained, firefighters in Gironde on Saturday were busy dousing the hot and still smoking earth with water, an AFP correspondent said.

Authorities on Saturday reopened a highway linking Bordeaux and Spain after closing a 20-kilometre stretch on Wednesday.

Traditional firework displays for the Catholic Feast of the Assumption on Monday, when Mary is believed to have entered heaven, have been banned in several areas.

Corsica was lashed by winds travelling at 95 kilometres (almost 60 miles) an hour overnight and hit by hail, Meteo-France said.

Forecaster Claire Chanal said the storms expected this weekend could leading to flooding and hail.

EU members including Germany, Poland, Austria and Romania have pledged reinforcements totalling 361 firefighters to join the roughly 1,100 French ones on the ground, along with several water-bombing planes from the European Union fleet.

Most of the reinforcements had arrived on the ground, with the last 146 firefighters from Poland expected later on Saturday.

"Here we are all volunteers. We're trained, we want to help," said Tone Neuhalfel, a German firefighter aged 36.

The Atlantic port of Brest hit 35.9 degrees Celsius (96.6 degrees Fahrenheit), a record for the month of August.

In eastern France, police said on Saturday they were banning entry to most forests in the Bas-Rhin region near the German border.

Cars, bicyclists, hikers, hunters and fishermen are prohibited from entry until Tuesday, police said in a statement. Only residents will be able to access the area.

"It's an extreme step in the face of an exceptional situation," said Pierre Grandadam, president of a group that includes the Alsace forested communities.

"Everything is dry, the slightest gesture can lead to a conflagration. I've never seen anything like it," said the 74-year-old.

The blaze near Bordeaux erupted in July -- the driest month seen in France since 1961 -- destroying 14,000 hectares and forcing thousands of people to evacuate before it was contained.

But it continued to smoulder in the tinder-dry pine forests and peat-rich soil.

Officials suspect arson may have played a role in the latest flare-up, which has burned 7,400 hectares since Tuesday.

Fires in France in 2022 have ravaged an area three times the annual average over the past 10 years, with blazes also active in the Alpine Jura, Isere and Ardeche regions this week.

European Copernicus satellite data showed more carbon dioxide greenhouse gas -- over one million tonnes -- had been released from 2022's forest fires in France than in any summer since records began in 2003.