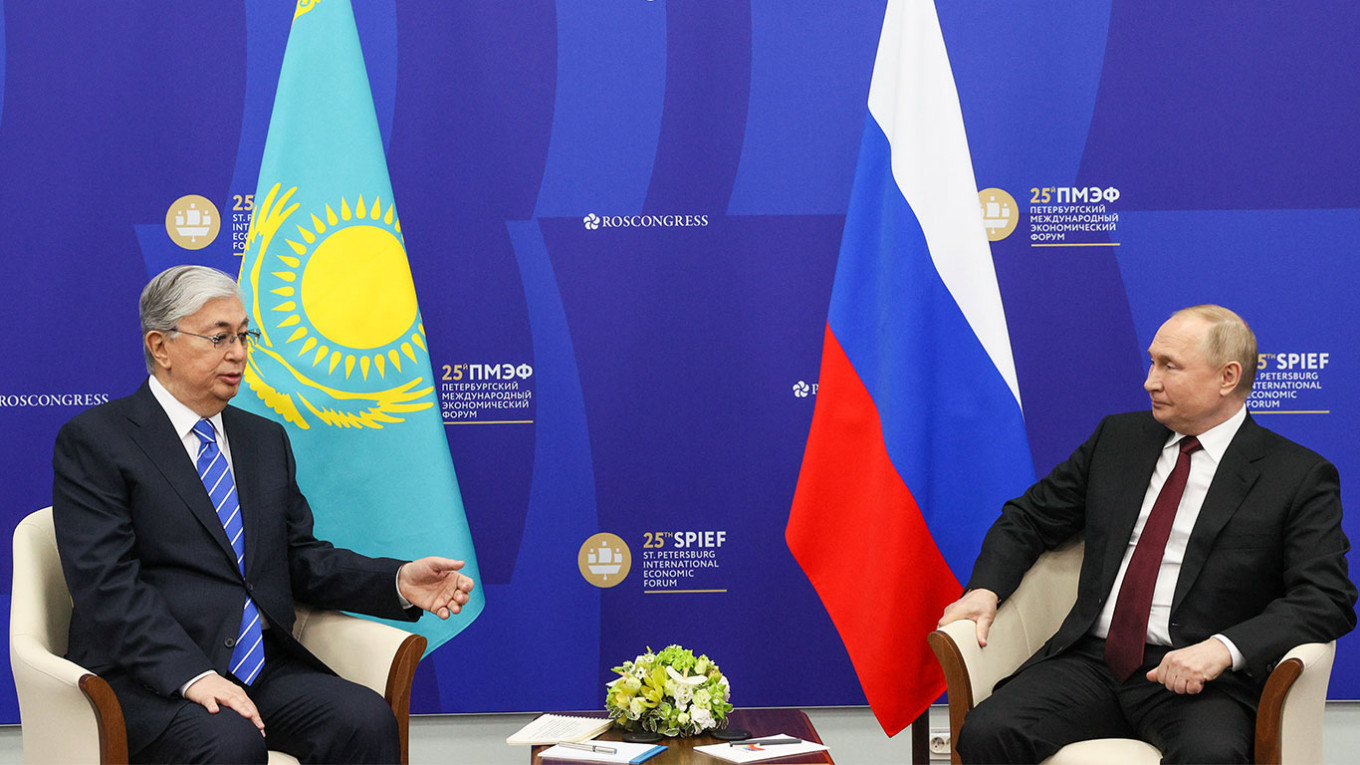 world's longest continuous border with Russia, has long balanced its status
as Moscow's most trusted ally in ex-Soviet Central Asia with attempts to
maintain cordial ties with the West.

But Moscow's invasion of Ukraine, combined with Russian perceptions that the
Kremlin secured the Kazakh regime during a political crisis earlier this
year, have turned that balancing act into a high-wire walk, experts say.

Tokayev reiterated his country's refusal to recognise what he called "quasi-
state" entities in eastern Ukraine, where Moscow has been advancing since
invading in February.

The Kazakh president also criticised Russian politicians and commentators,
whom he accused -- without naming names -- of sowing "discord" between the
two countries by launching public attacks on Kazakhstan.

Arkady Dubnov, a long-time watcher of Russia's relations with Central Asian
states, said Tokayev's comments were "impressive" given he was standing in
front of Putin.

"Tokayev is the type of figure we are no longer used to seeing (in Russia).
He did not fawn, he looked directly into Putin's eyes," Dubnov said in a
Wednesday interview with the Russian media outlet Republic.

One of the most strident critics of Kazakhstan's neutral stance on Ukraine
has been Margarita Simonyan, the editor-in-chief of Russia Today, who
moderated Putin and Tokayev's discussion on June 17.

In February Kazakhstan's foreign ministry ruled out recognising the
territories Moscow calls the Luhansk and Donetsk "People's Republics". Not
long after, Simonyan asked her social media followers why Russia had "saved"
Kazakhstan during a historic bout of unrest at the start of the year.

Simonyan's husband, television show presenter Tigran Keosayan, went further
in April, unleashing a tirade against Kazakhstan's leadership that was so
vicious the foreign ministry pledged to bar him from the country.

"Look carefully at what is happening in Ukraine," Keosayan threatened,
calling the government "sly asses".

"What is this ingratitude?"

Tokayev appeared to be on shaky ground in January, as protests over an energy
price spike swept the nation and more than 200 people died in subsequent
clashes with the military.

The arrival of troops from a Moscow-led security bloc, the Collective
Security Treaty Organisation, bolstered Tokayev's position at the expense of
a powerful political clan tied to his long-ruling predecessor, who was seen
by some as using the crisis to usurp the president.

In an interview with Russian media earlier this month, Tokayev pushed back
against the idea that Kazakhstan had been saved by the intervention.

But Maximilian Hess, a fellow with the US-based Foreign Policy Research
Institute, told AFP that the Kremlin is unlikely to see it that way.

He said that Kazakhstan may already be suffering retaliation.

Since the invasion began, a Russia-controlled pipeline carrying both Russian
and Kazakh oil -- whose deliveries account for more than half of Kazakh crude
exports -- has twice had stoppages.

Hess argued the stoppages smelled of politics, even if both sides offered
other explanations.

"There are significant links between the Russian and Kazakh business elites
that Putin can lean on to try and pressure Kazakhstan to take a more
supportive position," Hess added.

But while Russian pressure is to be expected, Kazakhstan "cannot jeopardise
its core national interests," Nargis Kassenova, a senior fellow at Harvard
University's Davis Center for Russian and Eurasian Studies, told AFP.

That includes territorial integrity, "hence the non-recognition of quasi-
states", Kassenova said, as well as avoiding the deep economic isolation that
Russia has fallen into due to unprecedented Western sanctions.

Dosym Satpayev, a political analyst based in Kazakhstan's largest city
Almaty, said Tokayev's comments on Ukraine at the forum were inevitably
addressed to a domestic, as well as foreign, audience.

Among Kazakhstan's diverse population of 19 million, which includes large
Russian-speaking and ethnic Russian parts, Moscow's hyper-aggressive foreign
policy has attracted both support and opposition, he said.

Tokayev is also trying to bridge a "legitimacy gap" after questions about his
own role in the violence in January, Satpayev told AFP.

For his part, the Kazakh leader appeared intent on smoothing the hubbub over
his comments to Putin during an appearance at another economic forum in
Qatar.

Speaking in English to Bloomberg TV on Tuesday, career diplomat Tokayev said
Putin was a "staunch ally" with whom he had a "very nice meeting" immediately
after the Saint Petersburg event.