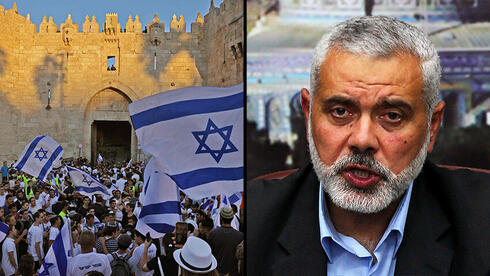 GAZA CITY, Palestinian Territories, May 22, 2022 (BSS/AFP) - Hamas leader
Ismail Haniyeh warned Sunday against a planned march by Jewish nationalists
through Israeli-annexed east Jerusalem, saying that the Palestinian Islamist
group would use "all possibilities" to confront it.

The controversial so-called "flag march" is due to take place next week to
mark Jerusalem Day, which commemorates the unification of the city after
Israel annexed east Jerusalem in 1967.

The route, provisionally approved by Israeli authorities, allows marchers to
enter the Old City through the Damascus Gate, heavily used by Palestinians,
en route to the Western Wall.

Israeli authorities have not approved a route that would see the march
entering the flashpoint Al-Aqsa compound, and this has never happened in the
past.

At a speech marking a year since an 11-day flare-up in the conflict between
Israel and the group that rules Gaza, the Hamas leader alleged there had been
"calls to storm the Al-Aqsa mosque and hold a march of flags".

"I warn the enemy against committing such crimes," Haniyeh continued, adding
that "the resistance... in Jerusalem and the West Bank will not allow or
accept that such Jewish nonsense passes at Al-Aqsa".

"We will confront it with all possibilities and we will never allow the Al-
Aqsa mosque to be violated," he said.

Al-Aqsa mosque compound is Islam's third holiest site, while the Western Wall
is the holiest site where Jews can pray.

His remarks come after more than 70 Palestinians were wounded last week in
clashes with Israeli forces at a Jerusalem funeral, according to Palestinian
medics, in unrest that police said included "violent riots" which threatened
officers' lives.

This came days after Israeli police stormed a funeral procession of Shireen
Abu Akleh, a veteran Palestinian-American Al Jazeera journalist who was
killed during an Israeli raid on the occupied West Bank city of Jenin.

Al Jazeera and Palestinians say Israeli forces killed Abu Akleh, while Israel
says she may have been killed by Palestinian gunfire or a stray shot from an
Israeli soldier.

By long-held convention, Jews are allowed to enter the Al-Aqsa compound but
not to pray there.

Clashes in Jerusalem last year precipitated the 11-day conflict between
Israel and Hamas that saw 260 Palestinians, including 66 children, killed,
while 14 people were killed in Israel, including one child.

Israel has imposed a crippling air and sea blockade on Gaza since Hamas took
power in the Palestinian enclave in 2007.