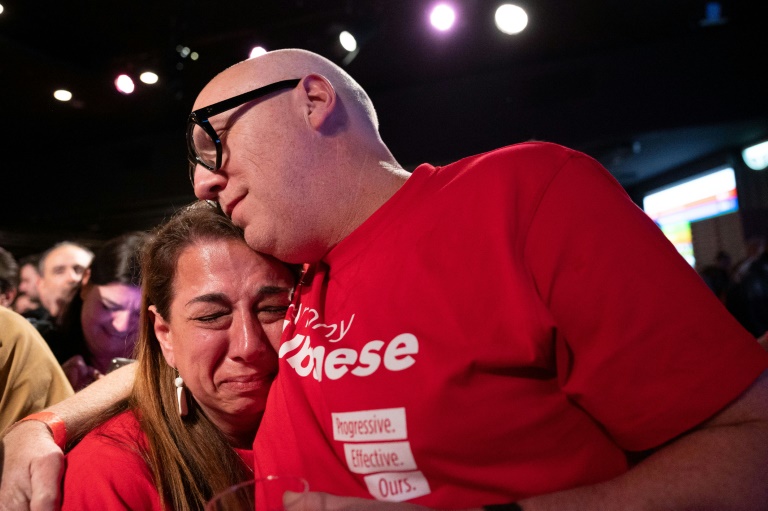 vowed to reset Australia's relations with the world and sweep aside the
country's reputation as a climate laggard Sunday, as he raced to form a
government in time for a key Tokyo summit.

Fresh from a victory that ended a decade of continuous conservative rule,
Albanese signalled an era of fairer, greener and less pugilistic politics for
Australia.

The 59-year-old Labor leader said Saturday's election was a "big moment" in
his life, but insisted he wanted it to be "a big moment for the country."

"I do want to change the country," he said as he waited to see whether his
Labor party can command a majority in parliament or will need help from
climate-minded independents.

Images of smouldering eucalypt forests, smog-enveloped cities and blanched-
out coral reefs have made Australia a byword for climate-fuelled destruction.

Under conservative leadership, the country -- already one of the world's
largest gas and coal exporters -- has also become synonymous with playing the
spoiler at international climate talks.

But Albanese put the world on notice that it should now expect a change.

He and key ministers are expected to be sworn in on Monday, just in time to
attend a summit with Japanese, Indian and US leaders -- the so-called Quad.

"Obviously, the Quad leaders meeting is an absolute priority for Australia,"
Albanese said in his first post-election event Sunday. "It enables us to send
a message to the world that there is a change of government.

"There will be some changes in policy, particularly with regard to climate
change and our engagement with the world on those issues."

Albanese said he will also use the visit to Tokyo to have one-on-one meetings
with US President Joe Biden, Japanese Prime Minister Fumio Kishida and Indian
Prime Minister Narendra Modi.

"I will return to Australia on Wednesday, and then we'll get down to
business," he added.

"Of your many promises to support the Pacific, none is more welcome than your
plan to put the climate first -- our people's shared future depends on it,"
said Fijian Prime Minister Frank Bainimarama.

The issue had plagued Australia's relations with the region, where China is
rapidly expanding its interests.

Official results showed Labor leading in 74 seats -- almost within reach of
the 76 required for a majority in the powerful 151-seat lower house. More
than a dozen seats were still undecided.

For many Australians, the election was a referendum on polarising outgoing
prime minister Scott Morrison.

His tumultuous tenure saw the country smashed by bushfires, droughts, floods
and a pandemic, all of which shattered usually happy-go-lucky Australia's
sense of security and their faith in government.

Morrison drew revulsion for playing down the impact of climate change on
Australia's ever-worsening disasters and insisting "I don't hold a hose,
mate" when asked to justify holidaying overseas during the bushfire crisis.

"Being in Hawaii when half the country is burning to the ground was probably
not a wise decision," said Dean Bergin, a 32-year-old investment fund
manager.

"Anyone with half a brain can see that. It's the opposite of leadership."

Voters responded at the ballot box with a sharp rebuke of his Liberal-
National coalition -- ousting top ministers from parliament and virtually
expelling the party from major cities.

"I am very, very happy," said Kathy Hopkins, a 60-year-old disability support
worker in Sydney's beachside suburb of Clovelly, part of what was considered
an ultra-safe conservative seat.

She said climate was a major concern. "It's pretty important, especially for
younger people."

Local voters backed one of several independent women candidates, the so-
called "teals" -- who ran on pro-environment, anti-corruption and pro-gender
equality tickets.

Among the independents, Monique Ryan appeared to have taken the biggest
scalp: she was projected to win in the Melbourne seat of Treasurer Josh
Frydenberg, who has all but conceded his loss.

Ryan said she would make demands in return for her support if Labor falls
short of a majority in parliament, notably to cut carbon emissions by at
least 60 percent by 2030 and to create a federal anti-corruption watchdog
with teeth within six months.

"I am really very much looking forward to working with him," she said in a
television interview Sunday.

He also pledged to transform the country into a renewable energy
"superpower".

But he has so far refused calls to phase out coal use, or to block the
opening of new coal mines, mindful of the pro-coal and mining union factions
of the Labor party.

For Morrison's conservative allies the defeat is already spurring a battle
for the soul of the party.

A leadership contest is informally underway, with moderates blaming the loss
on a drift to the right.

Speaking at his Pentecostal church on Sunday, Morrison tearfully told the
congregation his time in the top job had "been a very difficult walk".

"God calls us" to duty he said, pausing repeatedly to compose himself. "I'm
pretty pleased that the last thing I say as PM is here."

The 54-year-old then pulled out his phone to conclude his speech with Bible
verse.

"Do not rejoice over me, enemy of mine. Though I fall, I will rise. Though I
live in darkness, the Lord is alive for me," he said.