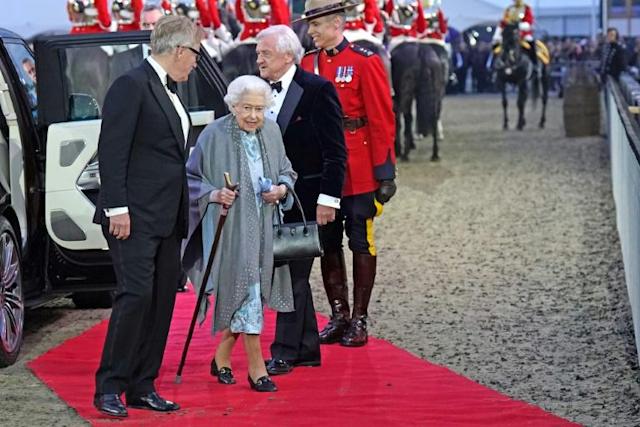 WINDSOR, United Kingdom, May 16, 2022 (BSS/AFP) - A smiling Queen Elizabeth II attended a Platinum Jubilee celebration at Windsor on Sunday, days after ill health and old age forced her to pull out of the opening of the UK parliament for the first time in nearly 60 years.

The 96-year-old monarch used a walking stick to make her way to the royal box at the show, entitled "A Gallop Through History", near her Windsor Castle home west of London.

The audience gave the queen a standing ovation at the star-studded equestrian extravaganza, led by Hollywood actors Tom Cruise and Helen Mirren.

The queen on Friday spent almost an hour at the Royal Windsor Horse Show at the same venue, in an increasingly rare public appearance.

The queen last week did not open parliament, the first time she has missed the event since 1963.

Officials blamed her absence on "episodic mobility problems" -- understood to be difficulties walking and standing -- that have dogged her since last year.

An unscheduled overnight hospital stay last October and frailty have seen her withdraw from a string of public engagements.

She was last seen in public at the end of March, at the Westminster Abbey memorial service for her late husband, Prince Philip.

At that event, she used a walking stick and required assistance to get to her seat.

Her dwindling appearances, plus a bout of Covid earlier this year, have fuelled concerns for her health in her record-breaking 70th year on the throne.
Four days of public celebrations for her Platinum Jubilee are planned for early June, including military parades and a public pageant, as well as picnics and a pop concert.

Her eldest son Prince Charles, 73, stood in at the state opening of parliament, in the clearest sign yet that her reign is coming to a close.