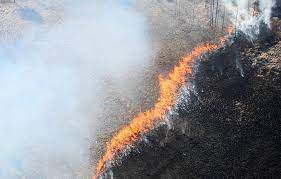 Russia has increased by 4,500 hectares over the past day, the press service
of the Federal Aviation Forest Protection Service reported on Monday.

As of Sunday morning, 129 forest fires were burning in Russia on an area of
19,657 hectares.

Forests are burning in the Krasnoyarsk region, where 12,509 hectares are on
fire. Also, vast areas of forests are burning in the Republic of Khakassia
(2,836 hectares), Irkutsk (2,009 hectares) and Tyumen (1,443 hectares)
regions, and the Republic of Tyva (1,390 hectares). Relatively small areas of
less than 1,000 hectares are engulfed by fire in Kurgan, Tomsk, Omsk,
Novosibirsk, Kemerovo, Jewish Autonomous and Sakhalin regions, the Republics
of Altai and Buryatia, as well as in the Trans-Baikal Territory.

Forest fires are continuing to burn in specially protected natural areas.
In Tuva, there is a fire in the Ubsunur Hollow Nature Reserve on an area of
1,869 hectares. In the Krasnoyarsk region, 70 hectares are on fire in the
Sayano-Shushensky Reserve, in the Kemerovo region - 50 hectares in the
Shorsky National Park.