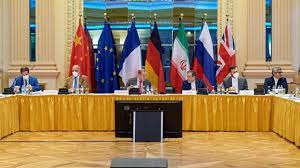 diplomat said Monday that he hoped a meeting of foreign ministers in New York
this week would build positive momentum towards kick-starting stalled talks
over the Iran nuclear deal.

The foreign ministers of China, Russia, Germany, France and Britain are
expected to meet to try to relaunch talks aimed at getting the United States
back into the pact, Jean-Yves Le Drian said.

"We will without doubt have a meeting of the joint commission of the JCPOA,
in all likelihood in the week", he told reporters.

The Joint Comprehensive Plan of Action is the agreement the United States,
China, Russia, Germany, France and Britain reached with Iran on Tehran's
nuclear program in 2015.

Former president Donald Trump pulled America out of the deal in 2018,
reinstating sanctions on Iran that Washington had lifted as part of the
agreement.

Since then, Tehran has also retreated from many of its commitments.

Trump's successor Joe Biden has indicated he wants to return to the deal,
but his administration has expressed impatience at the stalled talks.

Le Drian told reporters on the sidelines of the annual UN General Assembly
high-level meeting that a resumption of talks had not occurred because of
Iran, which elected a new president in June.

"It is important to ensure that during this week we can try to engage a
positive dynamic to resume the Vienna discussions on the return of Iran and
the United States to the JCPOA," he added.

Diplomats told AFP that the current plan is to meet on Wednesday afternoon,
but that the timing is still to be confirmed.

Josep Borrell, the European Union's foreign policy chief who will meet
Tuesday with his Iranian counterpart to urge him to resume talks "as soon as
possible," ruled out a Wednesday meeting.

He is due to hold bilateral talks with his German, Chinese, French, British
and Russian counterparts. They are all parties to the Iran nuclear agreement.

No meeting is planned with US Secretary of State Antony Blinken.