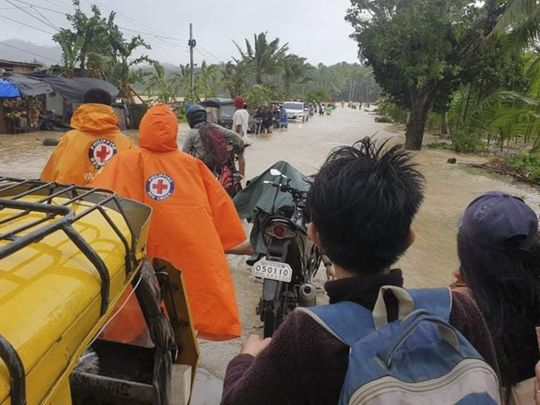 MANILA, Sept 9, 2021 (BSS/AFP) - At least one person died and 17 were
missing after a storm dumped heavy rain and caused flooding in the
Philippines, authorities said Thursday, as a powerful typhoon barrelled
towards the country.

Tropical Storm Conson hit the central province of Eastern Samar as a
typhoon on Monday before weakening as it passed over the archipelago, forcing
around 10,000 people to flee their homes, according to the National Disaster
Risk Reduction and Management Council.

One person drowned on the island province of Marinduque, said Mark Timbal,
spokesman for the disaster agency.

Another two deaths reported in Masbate province were yet to be confirmed by
the authorities.

At least seventeen people, mostly fishermen, have been confirmed missing.

Floods were recorded in the provinces surrounding the national capital
region along with communities in central regions, according to the disaster
agency.

The heavy rain and flooding came as Typhoon Chanthu -- packing maximum
sustained wind speeds of 195 kilometres per hour (121 miles per hour) --
swept across the Philippine Sea towards the country's northeastern tip.

Chanthu is expected to graze Cagayan province on Friday, dumping intense
and "at times torrential" rain over the region, before continuing north
towards Taiwan, the state weather agency said.

In the most vulnerable areas, "pre-emptive evacuation is advised... to all
those who have weak or... shanty houses," Darwin Sacramed of the provincial
disaster agency told AFP in a text message.

The Philippines is hit by an average of 20 storms and typhoons every year,
a dangerous and disruptive part of life in most of the country.

As the surface layer of oceans warms due to climate change, cyclones are
becoming more powerful and carry more water, posing an increasing threat to
the world's coastal communities, scientists say.

The deadliest cyclone on record in the Philippines was Super Typhoon
Haiyan, which left more than 7,300 people dead or missing in 2013.