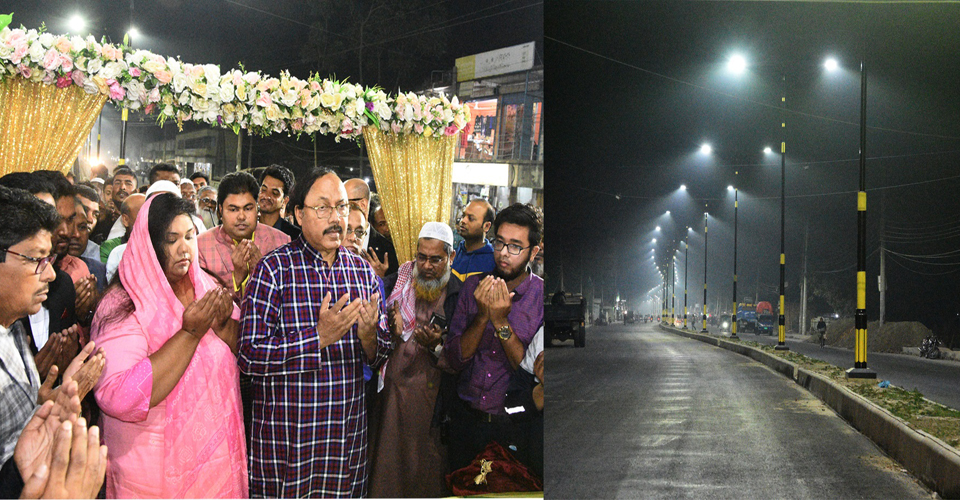 RAJSHAHI, Nov 25, 2022 (BSS) - In addition to many others, Rajshahi city dwellers got another illuminated street as the city corporation has brought it under modern street lighting on Thursday evening.

City Mayor AHM Khairuzzaman Liton accompanied by his office colleagues and other concerned officials switched on the street lighting on the starting point of the road from Naodapara bus terminal to Bhadra railway crossing.

Rajshahi City Corporation has installed 330 decorated and eye-catching lights on 165 poles on the island of the 4.17-kilometer road which has been elevated to four-lane with footpaths and concrete drains on both sides recently.

Mayor Liton said the energy saving lights at Drishtinandan will be turned on and off automatically by the auto-logic controller.

Very recently, the city corporation has introduced lighting on the newly renovated 2.5-kilometer street from Swachh Tower Crossing to Talaimary crossing. A total of 130 electric poles on the island of the road were erected and each of the poles has 13 modern lights.

Apart from this, 180 garden lights were installed on the embankment along the south side of the road.

It has also introduced lighting on the starting point of the newly-constructed 6.793-kilometer east-west road from Alif Lam Meem Bhata crossing to Shayampur.

The city corporation has installed and launched a modern and eye-catching lighting system on the 4.2-kilomter Bilsimla-Kasiadanga road to ensure security of people and vehicles during the night time movement in the city.

A total of 174 altitude decorative poles were installed with 384 power-saving LED bulbs in the shape of flying butterflies at a cost of around Taka 5.22 crore.

To make Rajshahi city more bright and attractive at night, the high altitude flood lights were installed in the City Street.

Liton said the road has recently been elevated to a four-lane from 30 feet to 80 feet wide with 10 feet wide footpaths and concrete drains on both sides of the road at a cost of around Taka 52.75 crore.

There is also an eight-foot bicycle lane on the southern side of the road.

A decorative island has been constructed while trees were already planted on
the island to bring a greenery look there, he said.

"We've also installed street lighting on both sides of the widened roads from Upashahar crossing to Sonadighi crossing and from Malopara to Sagarpara crossing at a cost of around Taka 2.5 crore," Liton added, while talking to BSS.