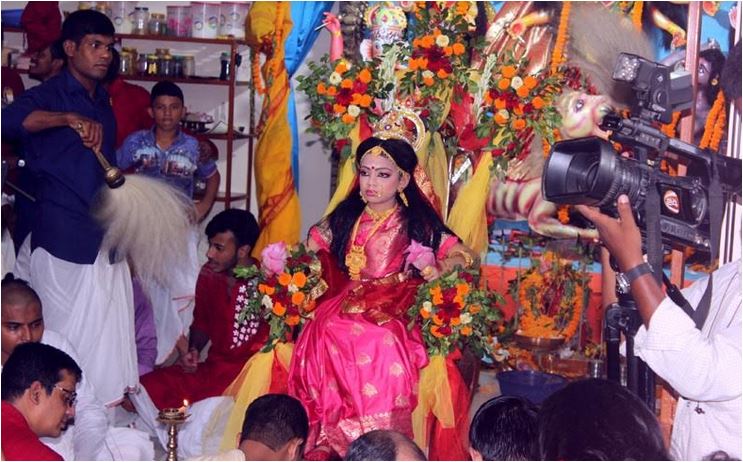 RANGPUR, Oct 3, 2022 (BSS) - The Sanaton community celebrated the Kumari Puja
on the 'Mohaassthami' today through worshipping goddess Durga as a `Kumari',
a pure-hearted girl and the virgin form of the deity in the district.

Hundreds of the Sanatan devotees thronged the Puja mandaps to celebrate
Kumari Puja, one of the most significant programs during the five-day
celebrations of their greatest religious festivity of universal 'Sharodiya
Durgotsab' (Durga Puja).

The Sanatan people of all ages, including young girls and women, attired in
traditional dresses, thronged the 'Ramakrishna Ashram and Ramkhana Mission'
in the Mahiganj area in the city in festive moods to celebrate Kumari Puja
with due religious rituals and festivity.

President of the district unit of Bangladesh Puja Udjapan Parishad Ajoy
Prasad Babon said goddess Durga is being worshipped for time immemorial in
various forms including `Kumari', a pure-hearted girl and the virgin form of
the divinity.

One minor girl, symbolising the Kumari form of Mother Durga, was worshipped
on the ''Mohaassthami' in front of the idol of goddess Durga at the Mahiganj
Ramakrishna Ashram mandap in the city.

The Principal of Mahiganj Ramakrishna Ashram and Ramkhana Mission Swami
Sontotanand conducted the religious rituals of the 'Kumari Puja' there in
presence of thousands of the Sanatan devotees.

Celebration of the Kumari Puja began in the morning when the Sanatan devotees
thronged different Puja mandaps and started their offerings to mother Durga
in the form of `Kumari' as a symbol of a pure-hearted girl and the virgin
form of the deity.

The Sanatan devotees of all ages, including adolescents, teenage and young
girls, offered water, clothes and flowers at the feet of the `Kumari' along
with gold and silver ornaments amid due religious fervour.

Meanwhile, the five-day celebrations of the greatest religious festivity of
Durga Puja continue in a peaceful atmosphere amid tight security measures at
all Puja mandaps at different places in all eight upazilas of the district.