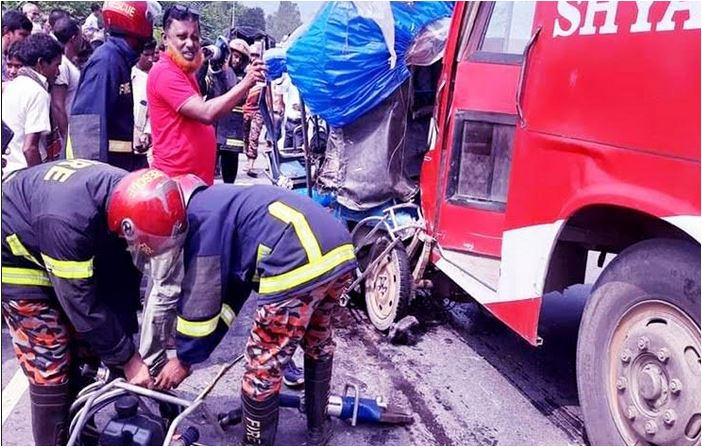 RANGPUR, Sept 28, 2022 (BSS) - Three people, including a teenage girl,
were killed in a road accident at the Barati bridge point on the Rangpur-
Dinajpur highway in Taraganj upazila of the district today.

"The mishap occurred when a passenger bus hit a battery-run auto-rickshaw
from behind damaging the three-wheeler and injuring its six passengers,"
Assistant Superintendent of Police (ASP) of Rangpur Highway Circle Zahidur
Rahman Chowdhury told BSS.

Being informed, the fire service and civil defense personnel and police
immediately rushed to the spot, rescued the injured persons, including driver
of the ill-fated auto-rickshaw, and sent them to Rangpur Medical College
Hospital (RpMCH).

The deceased were identified as Sumaiya Akhter, 12, of village Ekorchali
Sarkerpara, Smriti Akhter, 20, of village Dolapara and auto-rickshaw driver
Jahangir Alam, 44, of village Jagadishpur Uttarpara in Taraganj upazila of
Rangpur.

"We have seized the killed bus although its driver and helper fled from
the spot," the OC said, adding that a case has been lodged with Taraganj
police station in this connection.