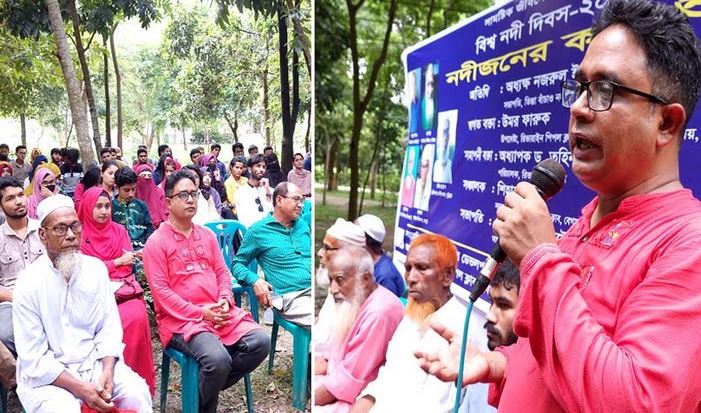 RANGPUR, Sept 24, 2022 (BSS) - Riverside elderly citizens of different
northern districts at a function today called for saving all rivers which are
the lifeline for the economy, environment, ecosystems and national heritage.

They made the call while narrating experiences on witnessing the process of
extinction and encroachment of rivers in the function titled 'Listening to
the Riverine People' held on the Begum Rokeya University, Rangpur (BRUR)
campus in the city.

Convener of the Riverine People Club Chaomoon Patwari Supta presided over
the event moderated by its Member-secretary Shihab Prodhan.

Students of the university attended the function that began with rendering
of a river song written, composed and sung by Sanjay Chowdhury. Rabiul Islam
and Mezbaur Rahman recited river-related poems.

Associate Professor of the Department of Accounting and Information Systems
Umar Farooque of BRUR gave a welcome speech terming the present situation of
rivers as miserable and many of the extinct rivers do not seem to be rivers
at all.

Elderly citizens from riverside areas of Rangpur, Gaibandha, Lalmonirhat,
Nilphamari, Kurigram and Dinajpur discussed their experiences on the process
of extinction of rivers and its adverse impacts on the life, economy,
environment and ecosystems.

Naya Miah hailing from the riverside area of the extinct river Moruadah in
Sundarganj Upazila of Gaibandha highlighted the history and tradition of the
river.

Noor Islam from the Deonai riverside area in Nilphamari recounted his
experience of taking a brave role and struggles against encroachment of the
river.

Nazir Hossain from Chakirpasha area in Rajarhat upazila of Kurigram
highlighted the bitterness of fighting for half a century to protect the
river Chakirpashar from illegal occupants.

Fisherman Tayjan from the same area said, "I had been earning livelihood by
fishing in the river Chakirpashar all my life. Now, I can no longer go down
to the river due to the threat of illegal encroachers."

In his concluding speech, Director of the Riverine People and Professor of
the Department of Bengali of BRUR Dr. Tuhin Wadud stressed on saving all
rivers and ensuring uninterrupted water flow to improve environment and
national economy.