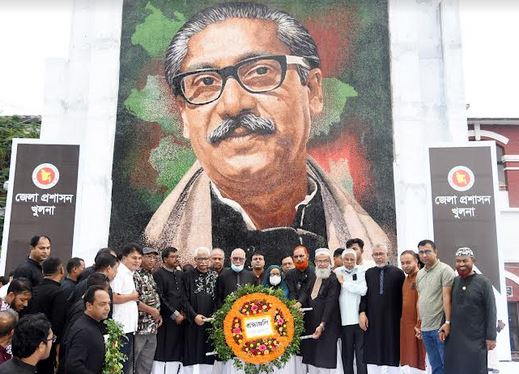 The day begn through hoisting of national flag at half mast in all government, semi-government, autonomous and private buildings.

Government and semi-government organisations placed wreaths at the monument of Bangabandhu on Khulna deputy commissioner office premises around 8.30am. Mourning rally has brought out in the city followed by  discussion meeting, doa mahfil at party office.

Freedom Fighters, government high officials and leaders of civil society, among others, also placed wreaths at the potrait of Bangabandhu.

Distribution of food among the destitute and screening of film on life and works of Bangabandhu and special milad mahfils and prayers at all religious institutions were also held.

Besides, competitions on painting, essay writing, hamd and recitation of poems, discussions focusing the life and works of Bangabandhu Sheikh Mujibur Rahman and national history were arranged in the educational institutions and other places.

Besides, Khulna district administration arranged the holy Quran recitation and distributed foodstuff and other ingredients to orphanages of different madrasas and orphanage institutions.

The city and district units Awami League and its front organisations also observed  various programmes marking the day here and atvupazila headquarters in a befitting manner.

The programmes begun with hoisting of national flags and black flags all the party offices in the city and district,  wearing of black badges, placing wreaths at the potrait of Bangabandhu, distribution of food among the distressed people, milad mahfil and discussion meetings on life and works of Bangabandhu.

The upazila administrations also observed the day through similar programmes in the nine upazila in the district.