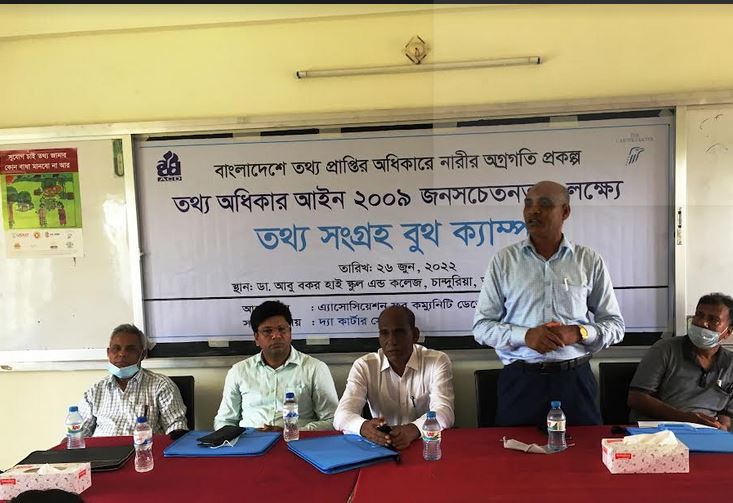 RAJSHAHI, June 27, 2022 (BSS) - A daylong booth camp for creating awareness among people particularly marginalized women, on the Right to Information (RTI) Act was held at Dr Abu Bakar High School and College Hall Room under Tanore Upazila in the district.

Association for Community Development (ACD) hosted the camp in collaboration with the Carter Centre on Sunday.

Organised on behalf of the "Advancing Women's Right of Access to Information in Bangladesh" project, the camp showcased ideas about various public services among the marginalised community besides making them interested and inspired to the services.

Ensuring responsiveness of the GOs and NGOs for providing information in an efficient and equitable manner was the main objective of the camp.

Coordinator of the project Subrata Kumar Paul moderated the discussion.

Terming the access to information as vital the discussants viewed the full-length implementation of the RTI act with unhindered flow of information by all government and non-government organization's concerned needs to be ensured for expediting development and ensuring good governance everywhere in the society.

The project is being implemented in the Ward Number 5 and 6 of Rajshahi City Corporation (RCC) and Gogram and Matikata Unions of Godagari upazila and Chanduria and Saranjai Unions of Tanore upazila of Rajshahi district.

As a whole, the project is intended to create a congenial environment where women, especially Dalit and marginalized are able to enjoy Right to information from government and non-government agencies for protecting their fundamental Rights.