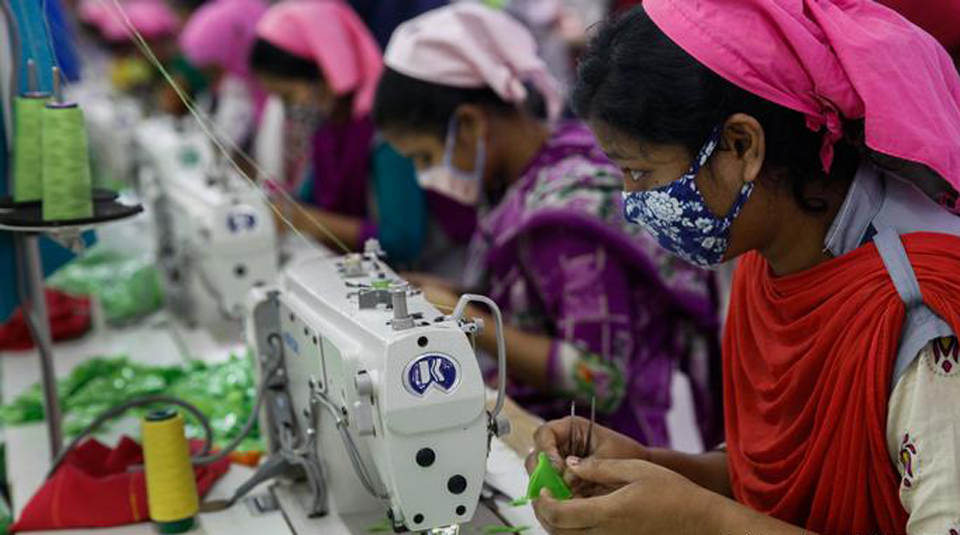 Manikganj, JunE 24, 2022 (BSS) - Rezia (40), a widow of village Bandutia under Manikganj Pourasava was passing her days in acute poverty even four years ago.

Her husband Arshed Ali was a foot-path hawker who sold ‘Jhal Muri’to the school students and pedestrians.

But her husband failed to overcome the poverty. Taking a loan from NGOs, Arshed Ali bought an auto rickshaw and started their new life. But suddenly he died in an accident.

The income of the family was halted and poverty caught them from all the sides.

Disappointed and illiterate Rezia began contemplating how to salvage their impoverished family of five members who were under aged except Rezia.

Finding no way, Rezia with the help of her neighbours took training on sewing from a NGO’s center. Firstly she was given only lunch in the mid-day.

Now she is driving her family with her own income. Recently Rezia arranged marriage of her elder daughter.

She has been maintaining all of his family expenses including the education of two children. Rezia built a wall shed house this year before Eid. Now she is happy.

Like Rezia, thousands of rural women in the district have become financially solvent by sewing hand-loom garments and marketing the products and thus making financial contributions to their families.

Some government organizations such as the Women Affairs Department, the Social Service Department and reputed NGOs like BRAC, ASA are playing a vital role in providing them with training of sewing machines and cash credits.

Sohely Akter, one of the BRAC sewing center workers of Garpara under Manikganj Sadar Upazila told BSS that they are proud of supplying their products to the big branding garments authorities like Aarong.

‘Our designed Panjabi, Fotua and women's wear had a great demand during the holy Eid, Sohely Akter added.

Ayesha-Abed Foundation, sewing, dyeing and finishing and also a renowned selling center at Manikganj bus stand area sources said they have two kinds of workers, some are permanent and some are contract basis workers.

They get salary on quality basis production.

BRAC authority has been conducting a good number of production centers in Manikganj district and all of the workers are women.