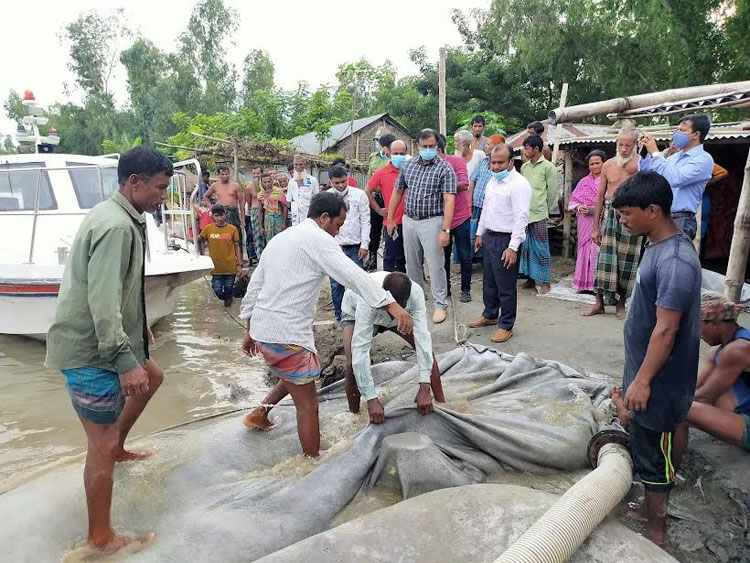 GAIBANDHA, Sept 2, 2021 (BSS) - Flood situation in chars and western sides of the river Brahmaputra located at Sundarganj, Sadar, Fuchhari and Shaghata upazilas of the district deteriorated further during the last 24 hours ending 9am today due to incessant rain and on rush of hilly waters from the upstream.

Bangladesh Water Development Board (BWDB) officials here said the water level of the Brahmaputra increased by 09 cm during the period and the river was flowing 48 cm above its danger mark at Fulchharighat point of the district.

Many char families of the upazilas have also been marooned and they are facing food and pure drinking water crisis due to floods.

Mohammad Al-Maruf, UNO of Sundarganj upazila, said Kapasia, Belka and Horipur unions of the upazilas have been flooded.

Water purification tablets were also distributed to the people of flood affected areas of the unions, the UNO said.

Sadar UNO Mohammad Abdur Rafiul Alam said most of the areas of Mollarchar, Kamarjani unions and a portion of Gidari union adjacent to the Brahmaputra river have been inundated.

Abu Rayhan Dolon, Fulchhari UNO, said most of the areas of Erendabari, Fazlupur and Fulchhari unions and some areas of Gozaria and Urya unions of the upazila have been flooded.

With the sharp rise of water level of the river the erosion has taken a serious turn at different points of the unions under the upazila, he added.

Md. Zahangir Kabir, Shaghata upazila chairman, said Holdia union which is located at eastern side of the river Brahmaputra is fully flooded and the inhabitants of the union have also been marooned creating untold sufferings to them.

Apart from it, the areas of Bharatkhali, Ghuridaha, and Shaghata unions of the upazila have also been inundated partially, he termed.

On the other hand, the Ghagot blowing through the mainland of the district registered a rise during the last 24 hours.

Sub divisional engineer of BWDB here ATM Rezaul Karim said the water level of the river rose by 10 cm during the time and the river was blowing 16 cm above its danger mark at New Bridge Road point of the district town.

The farmers fear huge losses as their standing crops particularly the T-Aman paddy and summer vegetables on 1515 hectares of land had been submerged due to flood this year, said an official of the office of the deputy director of DAE here.

In reply to a query, the DC said 40 tonnes of rice and Tk two lakh were also sanctioned for the flood affected families of the upazilas.

The upazila administrations have already started the distribution of rice and cash Taka to the flood and erosion victims, the DC concluded.